Posy Simmonds and Steve Bell, both satirists but so different from each other and both so good, were brought together at Kings Place, London; the Guardian’s new glass and glister home. 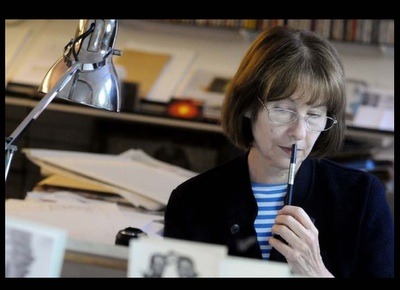 Posy Simmonds at work, with not a computer to be seen

On stage in front of a full house in a modern theatre there was some amiable bumbling about. Drawings were not easily found, one was left at home. Posy leaning down to scrape sketches and sketchbooks from the floor. It was all comfortingly, mythically English.

Informally chaired by the Guardian art critic William Feaver, the event brought forth snippets of interest: Steve, for example, claimed he can’t invent characters. He must caricature, and fortunately politicians just present themselves. How does he do it? He Googles a lot, takes photos at party conferences, and of anything of interest anywhere, and the whole lot is piped onto CDs: “I’ll show you my family snaps if you like.”

Posy does invent. Brilliantly, of course. No caricatures. She is meticulous and possesses the sharpest eye for detail and ear for dialogue of any living person. Posy is like one of the nurses she sometimes draws in her strips, smiling and saying, “This won’t hurt a bit”, as the needle slips in deep. Her patients awake stunned to find a whole landscape peopled with characters of the artist’s imagination but who remind us of everybody we have ever met and more than a few we would cross the road to avoid. 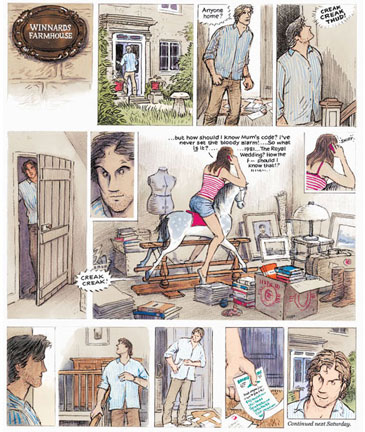 She uses no computer. Reference material is is stored in Posy’s retentive memory but, as back up, much is filed away. Posy treasures many clothing catalogues so that if shoes from, say, the 70s are wanted they can be found with a simple indoor search. (Just great if you have the space.)

A miniaturist in drawing production, Steve thrashes and whacks about in his same-size-as-printed space using a sharp pen as the bluntest of instruments. His strip “If …” is drawn in the morning and “the Big One”, his political cartoon, during the afternoon. 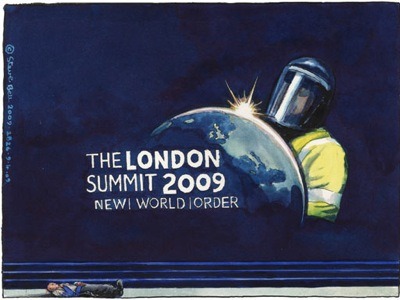 He claimed that that day’s deadline [the event was last Monday, April 6] was 7.30pm and he started work on his big political only by 6.30pm. That was pushing it a bit and I suspect is not entirely typical. However, it may help explain the occasional uneven nature of his work. When inspiration flags (not often) it shows, but when (usually) he is on form you can hear the cries of pain all the way from Whitehall. Posy’s work is leisurely, lucky woman, and probably timeless.

Steve’s voice, unsurprisingly, is resonant – good timbre – particularly when giving a maniacal cackle at something which amuses him. Posy, is quiet even when speaking but is also crystal clear. She is slim, was dressed smartly in a black trouser suit, as cool as you please. Red shoes. I don’t remember the colour of Steve’s shoes but his belly is potting nicely, thank you.

Two great talents together on top of their form on one fine evening. The Guardian’s Kings Place entrance currently sports an exhibition of Posy’s drawings and strips. Go!

PrevPreviousCartoon Pick of the Week
NextLocal cartoons for local peopleNext