A serious discussion of humour 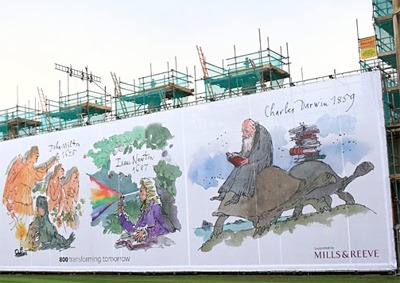 To the glorious surroundings of Pembroke College, Cambridge, for a learned and earnest discussion of humour in art.

The conference featured two keynote addresses: one by Robin Simon, editor of the British Art Journal and author of Hogarth, France and British Art, and a second by Quentin Blake on his approach to humour and how it informs his work, especially his recent 70ft mural for Addenbrooke’s Hospital depicting Cambridge University’s
800-year history.

Unfortunately, due to deadlines of the crust-earning variety, your correspondent missed both talks, but there was plenty else to tickle the synapses. It was an interesting departure for a humble practitioner to go back and be enveloped by the warm, crusty embrace of academe; a delightful chance to enjoy in-depth reflection on our art-form. It was a true cartoon nerd’s paradise (in the nicest possible way).

Topics ranged from Shanghai art-deco cartoons to a study of the African woman as muse for Georgian cartoonists like Gillray and Newton. An unexpected bonus was a short talk by the remarkable polymath Loyd Grossman (yes, that one) on Babar the Elephant, the much-loved French cartoon strip, delivered with a liberal sprinkling of wit – a dangerous weapon to use in the groves of academe.

I was keen to explore the reasons for the apparent distaste for the British to embrace the study or appreciation of cartoons as an art-form, wondering whether it was connected to a wider disdain for the art-form here by serious art mavens, while continental Europe holds it high.

Over coffee, I unfairly ear-holed poor Professor Jean Michel Massing of the History of Art deparment to find out. His off-the-cuff explanation was that there was no inherent disdain, it was simply down to lack of money to initiate research projects.

Your correspondent respects the learned professor’s pitch for funding, but reserves judgment, while retiring to scratch his beard and think.