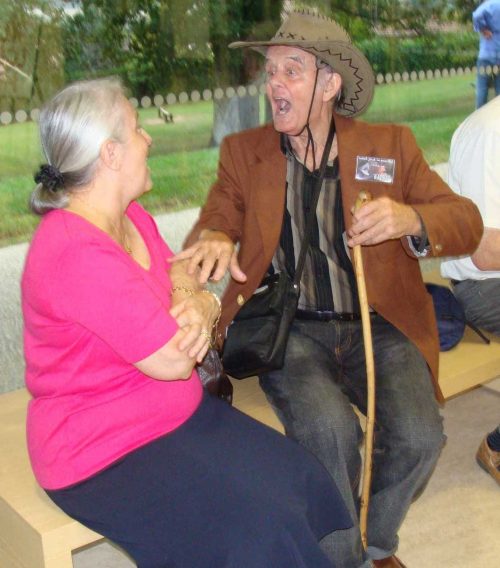 The Professional Cartoonists’ Organisation is saddened to learn of the death of veteran cartoonist Alex Noel Watson.

Born in Airdrie in 1929 Watson was a true renaissance man. As well as a cartoonist he worked as a film critic, travel writer, storyboard artist and book jacket designer. His cartoons appeared in publications too numerous to mention but most notably the Daily Express, Daily Star, Evening Standard, New York Times, Private Eye, Punch, Spectator, Sunday Times, Telegraph, Toronto Star and – a particular point of pride – The New Yorker.

Like many I only got to know the man in the last coupe of decades as he began making regular trips to the Salon International de la Caricature, du Dessin de Presse at d’Humour in Saint-Just-le-Martel.  Watson was one of the festival’s most effusive supporters, writing enthusiastically about it for the PCO’s blog as well as The Jester, the magazine of The Cartoonists’ Club of Great Britain.

With his bushman hat and walking stick he cut a distinctive figure, always to be found holding court with tall tales of his former exploits. A polyglot, he was very comfortable mixing with colleagues from around the world although he never made any concessions to accent – as far as I could tell his French was grammatically perfect but always spoken like a man from Lanarkshire rather than Limoges.

One could hardly mention one of the world’s great cities without Watson being able to tell you about something that happened to him there in his youth. It became a little bit of a game for me to see if there was any conversational topic that he couldn’t stake a claim to. So while standing by the medieval church in Saint-Just I regaled a small group with the story of the Alien gargoyle to be found on my hometown of Paisley’s historic abbey, a curiosity which had become an internet sensation after it was spotted by an American tourist. Having quietly taken it all in he replied “Yes, very interesting. Of course, I used to draw storyboards for Ridley Scott…” I conceded defeat.

That was 2013, which I believe was the last time he made it to France having actually postponed a surgical operation in order to attend. No longer able to travel in his last few years some of my fellow cartoonists would make a point of visiting his home in Surrey to keep him up to date on all that was happening.

His passing will no doubt come as a blow to long-time members of the CCGB and PCO as well as the good people of Saint-Just-le-Martel who have lost far too many of their friends in recent years.

The PCO send our condolences to his wife Milenka who we understand is not in the best of health and so has asked that those who knew Alex refrain from making contact until circumstances have improved.