Alexander Matthews has made it to the final of a worldwide comic strip competition. The Professional Cartoonists’ Organisation member has made the final ten of Amazon’s Comic Strip Superstar, with a strip entitled Evil Twin 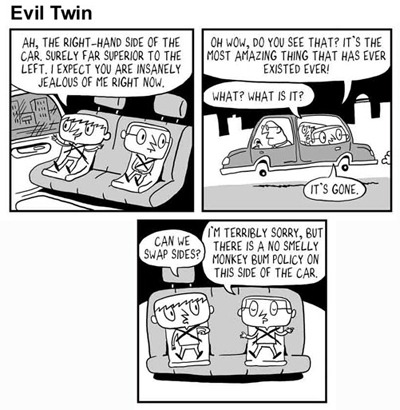 According to the site, “Evil Twin is the story of twins Myron and Ludwig, two 10 year-old boys who, like most brothers, are engaged in a constant battle of one-upmanship. They trade insults, devise devious schemes, and have a vivid fantasy world”. You can see ten daily strips and two colour Sundays here: Evil Twin.

Amazon.com and US comic publisher Andrews McMeel Publishing launched the contest in August. There were expecting around 5,000 entries. Following two elimination rounds, a panel of comic strip luminaries including Doonesbury‘s Gary Trudeau selected ten finalists. The winner, who will be picked in a vote by Amazon customers, will receive a publishing contract, a $5,000 (approx £3,000) advance and a monthly stipend to develop 20 further strips. 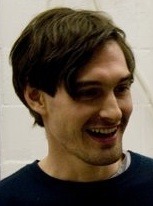 Bloghorn, our chests heaving with pride, asked Alex, left, about the competition. What’s the story with Evil Twin, Alex?

“I came up with the idea by wondering how to get my monkey characters from my previous strip King Monkey into two human characters. I was really happy with that strip and I thought it was the funniest stuff I had done, but it didn’t feel somehow commercially viable. Then the idea of twins came to me, and I suddenly realised how I could get a bit more reality into a strip. I was able to base a lot of the ideas on antics that my brother and I would get up to when we were kids. It felt to me that it might really connect to an audience with that kind of grounding in actual things we did and said. I think it’s important not to over-think a strip and overload it with characters and a too-clever scenario.”

You’re also making a name for yourself as a magazine gag cartoonist. Without wanting to get into a Harry Hill style “Which is best?” fight, do you prefer creating gags or strips?

“Gags, definitely. They take so much less time to draw! I can come up with strip ideas more easily, but good gags are much tougher. The characters in a strip allow you to hang a joke on something more tangible, but that rewarding effort of coming up with ideas added to the ease of drawing, makes gags win every time. I love that feeling of thinking up what I hope is a winning gag idea (happens all too rarely!) I’ve always wanted a published strip, though, and I don’t want to let go of that dream.”

Bloghorn hopes the dream comes true for Alex. You can vote for your favourite Comic Strip Superstar entry at the website, all you need is an Amazon account. Voting ends November 6.