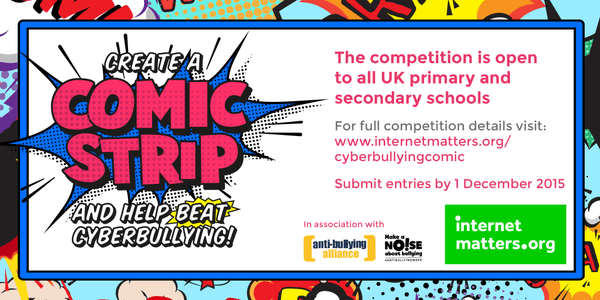 In another example of cartooning’s ability to attract and involve the public in helping worthwhile causes, Internet Matters are inviting children to create a comic strip and beat cyberbullying.

This competition gives parents and teachers the chance to encourage children to get creative and think about what steps they would take to stand up to cyberbullying. They could also be in with a chance of winning some amazing prizes for their school.

The ‘Create a comic strip to beat cyberbullying’ competition is open to all young people living in the UK in primary and secondary schools.

The winners will be selected by a judging panel and a public vote from 14th to 28th December 2015.

More details are available here on the Internet Matters website.

With thanks to Terry Anderson.