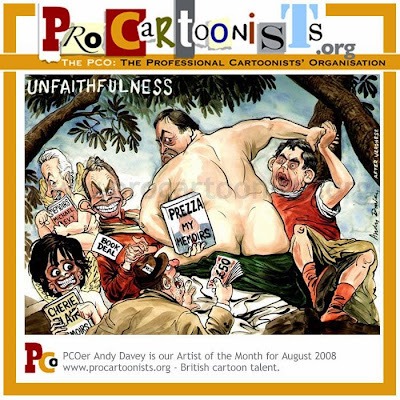 Andy Davey is the PCO Artist of the Month for August 2008.
Andy’s cartoons and caricatures have appeared in UK publications including The Guardian, The Times, The Sunday Telegraph, The Independent on Sunday, Private Eye, The Spectator, The New Statesman and Prospect. He has wielded his pen for TV too, drawing for the animated satirical cartoon series 2DTV and covering occasional political news events on Channel Five TV News and Sky TV News.

Bloghorn asked him a few questions, starting with a predictable one: What made you become a cartoonist?

First, I’m very embarrassed you asked me, because it’ll look like nepotism (Andy is the chairpersonman of the PCO, which runs Bloghorn – Ed). However, since you’re holding a water-pistol to my head …

The Voice from within made me do it, m’Lud. Hoarse from years of unacknowledged yelling, it shouted from atop a small grassy knoll somewhere in my gullet. It was only when someone asked me what all the shouting was that I took notice. Ah yes; the little noisy chap within.

He’d wanted to be a cartoonist from the age of about eight, seduced by an imagined life where ties were not essential but getting up late and being rather louche were absolutely expected. Although he didn’t know what louche meant. He wanted to draw characters from the pages of Wham! and Beano comics all day, essentially – with short breaks for football on the park – and saw a career in cartooning to represent just that.

My dour, rational self wilfully ignored such fancies and went about the long, long dreary task of establishing a deeply mediocre career in something hard, unrewarding and smelly (research chemistry). But the Voice kept shouting, letting up only while the usual unhealthy distractions of adolescence and early adulthood kept my mind off … well, anything really. Finally, I gave in – albeit far too late to build anything other than the career I have now.

From the PCO (Professional Cartoonists’ Organisation)
PrevPreviousAnimation: Monkey business at the BBC
NextCartoon Pick of the WeekNext