After several years as the plucky underdog, the Professional Cartoonists’ Organisation’s team, this year rebranded as Team Bloghorn, has finally emerged victorious from the annual Battle of the Cartoonists.

Our team came joint first with Private Eye in the Big Draw event in which four teams completed a large banner on the theme of “Now We Are Ten”, celebrating a decade of The Campaign for Drawing. They faced stiff competition from teams from The Sun and The Independent. 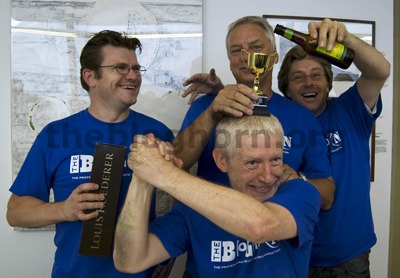 A banner year: The Bloghorn team was made up of, left to right, Andy Bunday, Clive Goddard, captain Pete Dredge, holding the cup, who oversaw proceedings, and Nathan Ariss 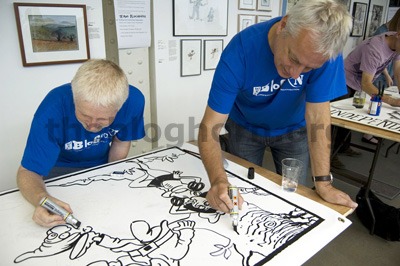 Work in progress: Clive and Pete get drawing. Click here, to see the full, completed banner

In a post-match interview, Pete told the Bloghorn: “Justice and victory at last for the PCO’s Battle of the Cartoonists’ team, albeit jointly with the Eye (Shurely shome mistake – Ed). What seemed like a clear-cut decision was mysteriously drawn out into a “cheer-off” head-to-head. And even then our clearly louder decibel reading was insufficient for us to be declared outright winners. A big draw indeed!” 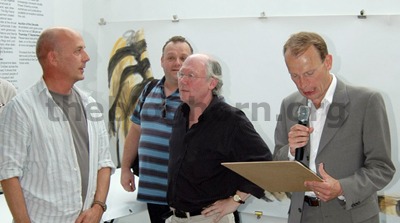 Joint winners: The Private Eye team, left to right, Simon Pearsall, Richard Jolley and Ken Pyne, also a PCO member, with MC Andrew Marr, who is a patron of the PCO

But the event is not just about the glory of winning. PCO members Tim Harries, and Cathy Simpson were on hand to run drawing workshops for children and adults at the event, which took place at the Idea Generation gallery in Shoreditch, London. 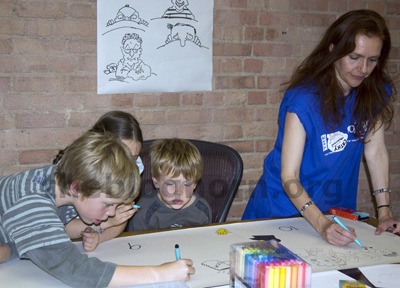 Drawn to it: Cathy Simpson hosted a workshop for children

The workshoppers were ably assisted by The Surreal McCoy. All photographs here are by Gerard Whyman, who was on hand as the official PCO photographer.