Caption competition with a difference

An informal cartoon caption competition, which began as a one-off on the Cartoonists’ Club public forum in the summer, is now into its 20th week. Matt Buck spoke to Noel Ford, moderator of the forum along with Nigel Sutherland and Ian Ellery, and asked how this is different to any other caption contest.

The competition is similar to the readers’ caption competitions that were once so popular in Punch magazine, but with one major difference: instead of competitors being provided with a cartoon to which they have to think of a caption, it’s the caption that is provided and they must draw a cartoon to suit. 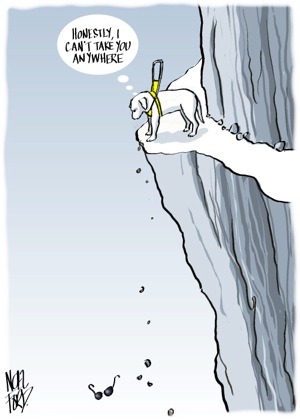 Noel’s entry from week three of the competition – “Honestly, I can’t take you anywhere” – was voted the winner

How did it start?
It was the brainchild of part-time cartoonist Chris Cooper (CLIB) and PCO member Ian Ellery. Chris originally wondered, in July this year, how different cartoonists would interpret a single cartoon scenario, and Ian suggested that, rather than a scenario, we should give the same caption to a group of cartoonists and see what they came up with. The idea was quickly taken up and what was at first intended as a one-off experiment, quickly became the popular competition that it now is.

Who can take part?
Anyone registered on the forum can have a go: full time pros, part-timers and people who aren’t cartoonists at all. We have had cartoons from people whose entry was the first cartoon they had ever drawn. The winners, so far, have come from a wide spectrum of full-time and part-time cartoonists. Apart from the fame and the kudos, the winner has to provide the caption for the next competition. 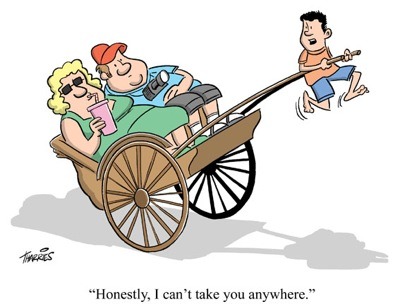 Tim Harries’ take on “Honestly, I can’t take you anywhere”

When does it take place?
Entries are posted on the forum between 12 noon on Saturday and 12 noon on Sunday. Voting takes place, using a points system, between 1pm Sunday and 6pm Monday. All entrants can vote and non-entrants can vote, too, subject to certain conditions.

How did you end up managing it?
Cynics might say it was the only way I can guarantee winning (twice!), but the truth is that, as a moderator on the forum, it was a natural progression. And, I’m also a control freak – so my wife tells me!

Why do you think it started?
Cartoonists are natural show-offs. We love drawing cartoons but we crave an audience. For the the new kids on the block it provides an opportunity to have their work viewed by a niche audience and to elicit comments from the more experienced contributors. For all of us it is an opportunity to draw whatever we like without editorial considerations. And, it’s great fun!