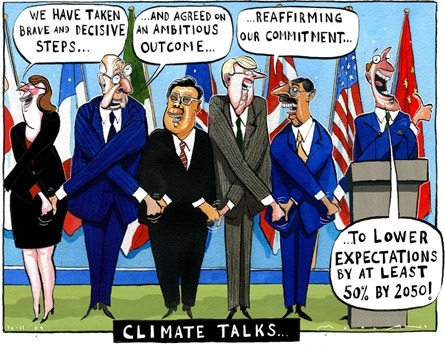 The 15th Cartoon Art Trust Awards were presented last night at a fundraising dinner at the Mall Galleries in London.

The dinner also celebrated the 21st birthday of the Cartoon Art Trust, the charity behind the Cartoon Museum. The trust has presented the CAT Awards annually since 1995.

PCO member Morten Morland (cartoon above) was among the winners, taking home the Political Cartoon Award. (There’s reaction from Morten to his win at the bottom of this piece.)

Joke cartoon award: Robert Thompson of Private Eye, The Oldie, The Spectator and others

Young cartoonists of the year: Alex Shaw (under 18) and Nick Edwards (under 30)

The Pont prize for drawing the British Character: Annie Tempest of Country Life. The Pont Award was set up five years ago in memory of Graham “Pont” Laidler, who drew the series The British Character in Punch in the 1930s and 40s.

A fundraising auction of cartoons was held in aid of The Cartoon Museum. These included a cartoon signed by Margaret Thatcher, and a Chris Riddell original cartoon about the financial crisis, signed by Prime Minister Gordon Brown and Tory leader David Cameron.

Morten Morland, Winner of the Political Cartoonist of the Year award, told Bloghorn:

It was a great evening, with the added excitement for me of picking up an award. It’s a peculiar feeling to receive that kind of honour in front of so many terrific cartoonists, most of whom would have had every right to stand up and shout: “WHAT?! HIM?” Fortunately they all waited until I was out of earshot.

Black tie events are a rarity for most cartoonists, and most would probably say mercifully so. However, this annual chance to dress up in hired ill fitting fineries is terrific fun – and a great celebration of cartooning as an art form and as a trade.

The evening is all about raising money for CAT with an auction of works donated by various cartoonists, including Neil Dishington and Steve Best. Closing bids ranged from respectable hundreds for the earlier lots to gobsmacking thousands for later ones.

When presenting the award for Joke Cartooning, film director Mike Leigh heaped praise on the work the small team at the Museum does, and quite rightly so! It is a terrific place which deserves to be supported in any way possible. For most of us it means happily paying ten quid to pop a balloon, or to be photographed sticking our heads through a humongous Dave Brown painting of an executioner holding the head of Gordon Brown. For those with rather more impressive bank balances, it means paying £3,500 for an  original Matt cartoon.