Cartoon contest is no laughing matter 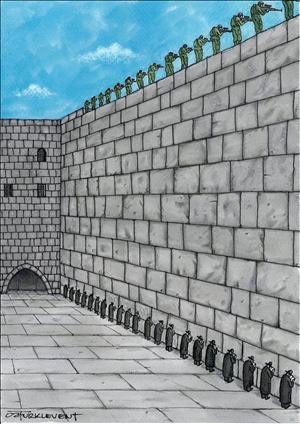 Turkey recently staged its 27th Aydin Dogan International Cartoon Competition and a 255-page catalogue was released, beautifully printed throughout in colour, with text in Turkish and English.

There’s a long list of successful exhibitors – 44 countries are represented – and a much longer list of entrants who did not get past the judges.

There are 127 Turkish cartoonists and a random count reveals that Serbia is represented by 35 entrants, China by 53 and Iran by 122. Four UK cartoonists participated but only Ross Thomson has survived, to exhibit two drawings.

The three UK cartoonists, who did not make it are Houmayon Mahmoudi, Stephen Mumberson and Alexei Talimonov. Maybe they didn’t draw enough brick walls and prison bars, of which there were plenty.

The first-prize winner, by Turkish cartoonist Ahmet Ozturklevent, is pictured above.

There is an overall sense of stifling bureaucracy while the threat of violence, usually implicit, is a common theme. There are few, if any, English-style jokes. Even Ross Thomson succumbed to drawing a couple of tanks, but at least they are not avoiding daisies.

In the exhibition there are messages galore for mankind – which mankind will almost certainly ignore.

The quality of much of the draughtsmanship is undeniable. The contestants can think, they can draw and they can be very witty indeed, but English-style humour, they would claim, is not part of their job description.