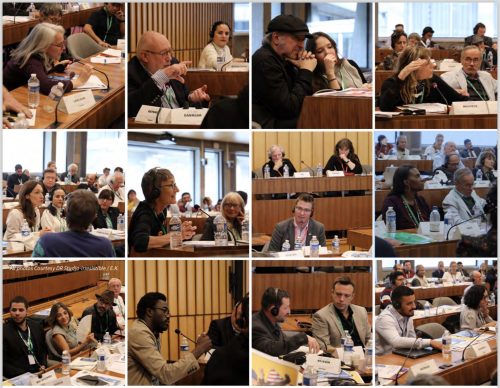 Monday (December 10th) was the 70th anniversary of the Universal Declaration of Human Rights. Earlier this year in October I was asked to attend the first Cartooning Global Forum day at UNESCO in Paris, to represent PCO (paying my own train fare). I made several useful contacts at this forum for future collaborations and will be following up with them in due course. Finally got to meet Malaysian cartoonist Zunar, (pictured below with Terry Anderson) who has finally had his travel ban lifted. (The next forum is being planned for October 2019, in between the weekends at St Juste.) 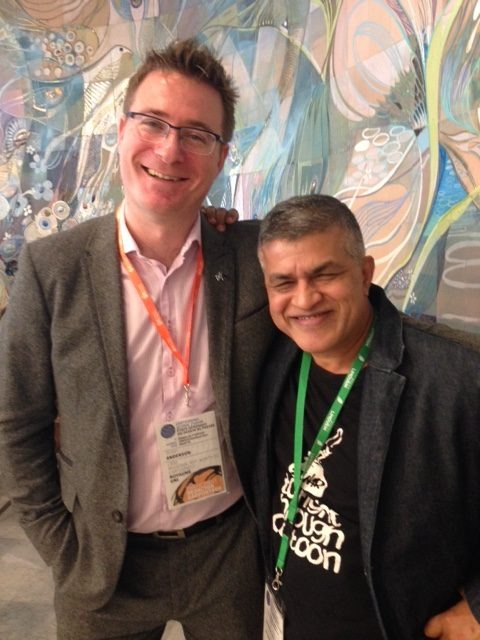 Dear colleagues, it’s a great pleasure to open the morning’s discussion on the topics laid out by Jérôme. These are lofty goals but if we believe in the power and value of cartooning as a medium then I don’t think it is beyond us to contribute toward their realisation. And if this forum is the beginning of a truly global co-operative undertaking by all cartoonists’ organisations, something I confess by own has tried and failed to create in the past, then so much the better.

Briefly: no conversation in this context and setting on the topic of peace could begin without acknowledging the contribution of our friends at Cartooning For Peace, and especially so soon after the loss of their honorary president Kofi Annan. We send them our best wishes and commend their exemplary work in the promotion of cartooning as a means of crossing barriers of understanding and promoting human rights, tolerance and peace.

Nor can we gather in this city and fail to remember the singular atrocity that unfolded on its streets in January 2015 and how for one moment it seemed as if the planet was galvanised and united by a single sentiment, Je Suis Charlie. There are participants here today who lost loved ones and friends on that day; we grieve with them and honour their courage.

Over the intervening years we’ve heard much about cartoonists as “canaries in the coal mine” and how our problems are early indicators of a wider, insidious and worsening chilling of freedom of expression. I’ve used the metaphor myself in the past but increasingly I dislike it as it implies a degree of fragility and dispensability. We are not victims or victims in waiting. We are essential to the health of press and media and therefore crucial to democracy. I would cite last year’s Humor Amenaçat initiative in Spain and the subsequent distribution of the Illegal Times freesheet as an excellent example of cartoonists and their allies pro-actively taking an urgent message directly tothe populace without awaiting a gatekeeper’s say-so. They were ahead of the curve; the FreeMuse anticensorship organisation later declared Spain the world’s top jailer of musicians, specifically rap artists protesting their government.

We kid ourselves if we believe the problems addressed by the UN’s SDGs are reserved wholly to the developing world.

CRNI knows the primary threat to cartoonists’ freedom comes from authoritarian governments, so I hope we’ll hear from those of you here who have first-hand experience of persecution by the state, by corrupt officials, military or police personnel. Share with us the means by which cartooning has exposed the malaise afflicting the societies in which you work. Where and when do you think cartooning has resulted in palpable change? For those who have come from larger organisations that work toward the goals of social justice and peace, have you used cartoons? If so, in what way and was if effective? If you would never use cartoons, tell us why. What lessons can we cartoonists glean from others’ willingness or resistance to the use of our work?

We are asked today to consider inequality. In very recent weeks we have seen how a cartoon proffered on one side of the world as fair comment can be interpreted on the other as an unwarranted, racist and misogynistic attack. No quarter was given in the ensuing debate; humourless snowflakes on one side, unrepentant white supremacists on the other. Very little humility or grace. Some (but hardly enough) acknowledgment of a bigger problem. Around the world editorial cartooning remains stubbornly male and, even in the multicultural west, largely white. We can do a better job of reflecting the diversity of experience and the inequalities that lie therein only if we are likewise as diverse. How may we at last achieve that? Positively discriminate and risk accusations of favouritism? Rely on merit, assuming a level playing field that simply doesn’t exist? For those who have encouraged newcomers into the profession, tell us about who wants to be a cartoonist in the digital media century and what we need to do to make our sphere a welcoming place for all. For those who have written policy with equality at its heart, guide us on best practice. And then more widely, tell us about projects you have undertaken that were designed to reach audiences not served by the typical press cartoon; the poorest or least educated in your society and minority groups of every classification.

Inevitably there will be some overlap with the work to be discussed this afternoon. It’s virtually impossible to talk about education without including inequality and vice versa. So do not be afraid to introduce an idea here that can be returned to later. But for those still seeking a way to grasp the matter at hand, for me these two broad goals can be boiled down to a single word: fairness. So consider, how do we make our profession fairer and how may our work make the world fairer? 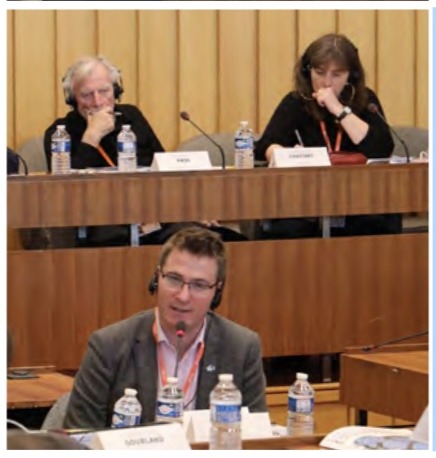 Terry Anderson speaking at the forum. This and the headline photos ©DR Studio-irresistable/E.K.

You can download a full copy of the the report from the Global Cartooning Forum here.

Zunar is giving a talk ‘Laughter As A Political Tool’ at University College London on 17th January. Here’s a link for more details and for booking tickets.

PrevPreviousWho pocketed the cartoon awards?
NextPCO Cartoon Review of 2018Next