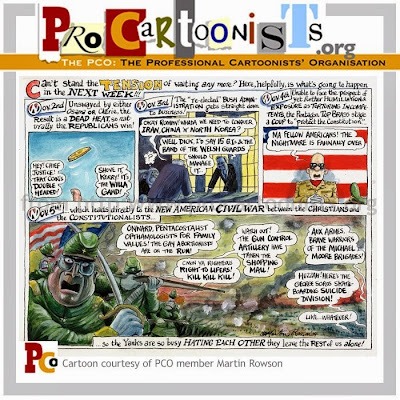 Basically, it’s a bugger, and quite often you have you make a virtue of necessity by saying you don’t know (the result). So in 2000 I did a cartoon for The Scotsman, drawn on the day of the election, to be published on the Wednesday, saying that Ralph Nader had won. Then again, in 2004, in a cartoon appearing the day before the US election, I just launched into fantasy, second guessing the outcome (click the picture for details). After all, we’re in the business of comedy and fantasy, so you should, with a little bit of guidance to the readers, be able to get away with anything! Just like the Republicans!

This cartoon first appeared in the Guardian during the 2004 US Presidential election campaign.

From the PCO (Professional Cartoonists’ Organisation)
PrevPreviousCartooning the US Presidential Election
NextCartoon exhibition: Giles – One of the FamilyNext