Everyone likes an online row, and cartoonist Rod McKie has provoked one on his blog with a blast at the recent Cartoon Art Trust Awards. (We blogged it here.)

Rod is an established professional cartoonist, well known for his forthright opinions. In this article he dismisses the entire genre of caricature (“It’s a fairly tired old medium now, isn’t it?”) and all political cartoonists (“They are all cowards who row-in with the ideology of the press barons they work for”). His particular beef against the CAT awards is that they are an “insular, parochial, London-based affair”, and he doesn’t appear to value many of those who won awards. Cartoonists have pitched in on his blog – including one of the award recipients – some agreeing and others disagreeing.

Bloghorn takes the view that anyone who sets up an award and is prepared to pay for the preparations, gets to choose how to judge it. You may not agree with their choices, but isn’t this always the way with awards ceremonies? Look at the grumblings that surround the Oscars every year.

But we are prepared to defend the Cartoon Museum itself, which is run by the Cartoon Art Trust. The museum, which receives no public funding, is among the most popular small museums in the country. There are some visitor reviews available here. Rod says the CAT has “never appeared on my radar” and adds that he knows nothing about the museum, as if that justifies his dislike. 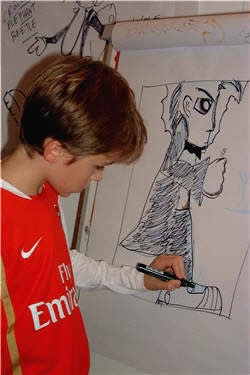 The London museum may seem irrelevant to a cartoonist based in Scotland, but if he did make a trip, he would find that they do some great work, and it’s not all about joke and political cartoons or caricature. Look at the work that cartoonist Steve Marchant does there, running endless workshops and creative classes for young people. These cover comics, graphic novels and manga … the works.

We also take issue with the notion that cartoons that appear in British newspapers and magazines are somehow “parochial”. Rod seems to be of the view that in a globalised economy all cartoons should appeal to the whole world. We argue cartoons should reflect the real lives and experiences of people and any attempt to homogenise them for a world audience would be bad for cartooning as a whole.

Discuss. All comments welcome. Comment moderation is turned on.