The Cartoonists, a team put together by the Professional Cartoonists Organisation, stormed to victory on the TV quiz show Eggheads last night, after winning each of their head-to-head rounds. Egghead Kevin Ashman described it as “the most comprehensive defeat we’ve ever had”. Here, team captain Alex Hughes explains how it all happened

A little over a year ago, I was approached by the makers of BBC quiz show Eggheads and asked if I’d like to put together a team of cartoonists for the upcoming series. I’ve done the odd pub quiz in the past, so accepted the offer and duly went about recruiting a team from the ranks of the Professional Cartoonists’ Organisation – a team comprising myself, Chris Burke, Robert Duncan, Graham Fowell, Royston Robertson and Martin Rowson. We sailed through the December audition and subsequently were invited to record the show in January of this year.

For the uninitiated, Eggheads itself is a fairly straightforward quiz. Each day, a new team of challengers goes up against the Eggheads, a team comprising past winners of other TV and radio quizzes such as Who Wants to be a Millionaire, Mastermind, Fifteen to One, The Weakest Link and Brain of Britain – the cream of British quiz talent.

For our bout, the Eggheads team comprised Kevin Ashman, CJ de Mooi, Daphne Fowler, Chris Hughes and Barry Simmons. Judith Keppel was waiting in the wings and Chris Burke was the stand-in for the Cartoonists.

The first four rounds are a series of head-to-head questions from a given category, where we pick one of our team to go up against our pick from the Eggheads. The contestants then go into the “question room” (in reality, a bench behind the main set) and are given three multiple choice questions each. If there’s no outright winner, it goes to “sudden death”.

The winner of each round is “safe” and allowed to compete for their team in the final round, whilst the loser is not. The final round is a general knowledge team round with the surviving challengers competing directly against the surviving Eggheads for the prize money, which, if it’s not won is rolled-over to the next day.

On the day of the filming we arrived bright and early on a crisp January morning with, as requested, a selection of light, brightly coloured non-patterned shirts at BBC Television Centre in White City, London. After resting in the former Top of the Pops Green Room we were ushered into the studio, which is when the nerves kicked in. Make-up was applied, microphones were attached and we met host Jeremy Vine.

There wasn’t much time for chit-chat though (up to five episodes are shot per day), so we went straight into the contest …

…and we won! We were only the sixth team out of the ten series to beat the Eggheads in each of the first four rounds. But to top that, we are the first team to have beaten the Eggheads outright, winning in every single round plus the final – we only got three questions wrong between us in the whole show.

And best of all, the last question, which surviving Egghead Kevin Ashman could not answer, was a cartoon question.

So, well done, team, we did brilliantly! Congratulations to Robert, Royston, Graham, Martin, and Chris in reserve. And our thanks to Al Capp‘s Shmoo… 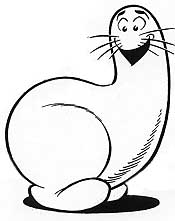 The editor adds: The BBC iPlayer recording of the show should be available online until November 5th 2009.