Cartoonists in the Dragons' Den 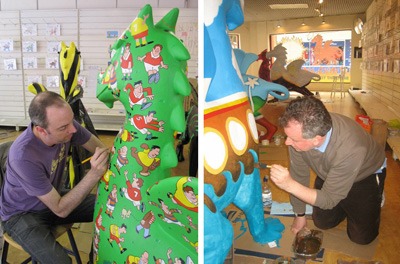 We’ve seen elephants in London recently, and this weekend sees dragons taking to the streets of Newport. Cartoonists from the PCO are involved once again.

Sixty SuperDragons, as they are known, will make their debut in the South Wales city on Sunday (July 18). Cartoonists Tim Harries, above left, and Gerard Whyman, right, have spent much of the past two months putting colourful designs on a canvas that is somewhat different to a piece of A4 paper: a 5ft by 6ft fibreglass dragon.

Tim created a dragon called “Scrum”, covered in cartoon rugby players, and Ger created not one but two works: “Shipley”, based on the city’s maritime history (with famous Newportians past and present gazing from portholes) and “Rodney”, which was sponsored by Newport Gwent Dragons rugby team, and named after their Rodney Parade ground. 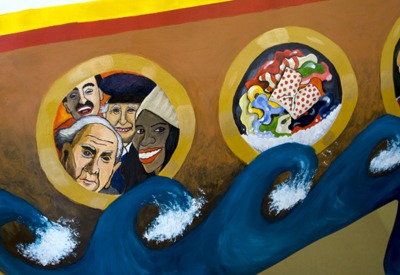 Detail from Shipley by Gerard Whyman

Ger told the Bloghorn that when work began at the end of April, he’d already had a useful experience: “The painting of a Big Board at the Shrewsbury Cartoon Festival proved a useful dry run, as many artists were working in a communal space in a disused shop – renamed the Dragons’ Den for the duration – which was open to the public. So, as well as painting, I was fielding questions from interested visitors.

“I knew I was taking on a lot of work in painting two dragons and it felt a daunting prospect. The little A4 pencil sketches had to be transferred to a 5ft structure that had curves, contours and odd crevices – no mean feat! The satisfaction of completing them was immense. Now that the project is complete I feel slightly at a loss. It’s nice to have my freedom back but I miss the camaraderie of the fellow artists in the Dragons’ Den.” 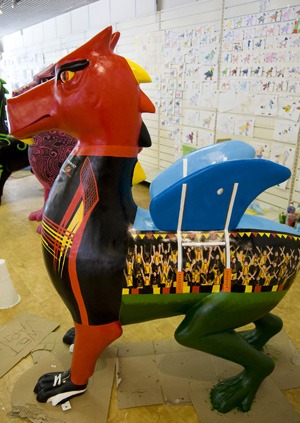 Tim said: “I put a design together loosely based on the idea of Where’s Wally? I covered the dragon statue with cartoon rugby players and only one rugby ball, which the public would be encouraged to search for. It was much more time-consuming than I’d envisioned and occasionally frustrating (where’s the “undo” button? Aaagh!) It was a strain on the knees and I had a slight addiction to Sharpie pens due to overuse. 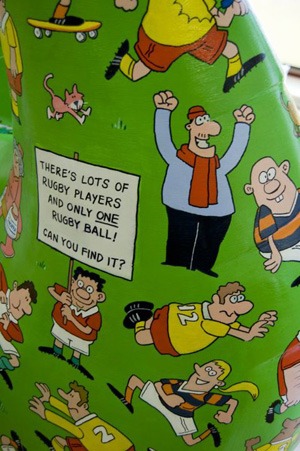 Detail from Scrum by Tim Harries

“The good points were working alongside lots of great local artists and illustrators, having a lot of fun actually painting and designing the dragon and seeing it finished, and getting a really good reaction from the public. Would I paint another one? Ask me again in six months when my knees have mended.”

The Launch of the SuperDragons Trail takes place at Newport’s Tredegar House on Sunday. 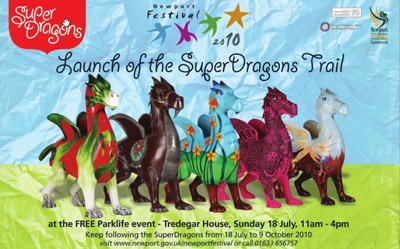 PrevPreviousEnd of an Era in Louviers
NextOpinion: The Patron of the ArtsNext