Cartoons sneak in by the back door

Parts of the Government Art Collection are on show together in public for the first time, at the Whitechapel Gallery, London. And it seems some cartoons have snuck in by the back door.

It’s free to get in — which is only fair as we taxpayers effectively own all the artworks on show – so I went along to see it. All the works have been selected by political figures, including Nick Clegg, Peter Mandelson, and the Culture Minister Ed Vaizey, who chose the work above, Michael Landy’s Compulsory Obsolescence (click to enlarge).

This caught my eye as it features a strip from Viz comic, as well as other cartoons and some humorous writing. There are letters, faxes and other paraphernalia, all of which are reactions to Landy’s most famous work: Break Down, which saw him destroy everything he owns in 2001.

Now, we’ve been here before, with “proper artists” appropriating the work of cartoonists, as well as posh galleries showing us what they think is funny. But this is a bit different.

Crucially, this is not a collage. Nor is it a print of a collage. In fact, the whole thing is a meticulous pen and ink drawing on a very big piece of paper (70cm by 99cm). That in itself made it quite impressive, as well as making me fear for Landy’s sanity as it must have taken an age to create.

The Viz strip, a two-page “The Critics” story which mercilessly takes the mickey out of Landy, is, of course, very funny. But what’s also funny is the thought of the victim of the strip slavishly copying it out. I found that oddly moving, like the ultimate expression of British people being willing to laugh at themselves! 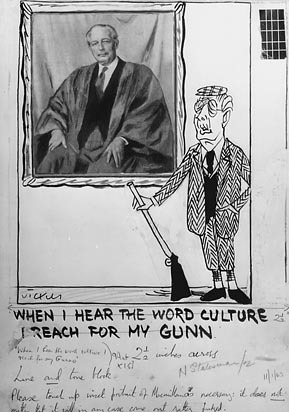 Unlike the anonymous cartoonists appropriated by the likes of the painter Roy Lichtenstein, the creator of “The Critics”, John Fardell, is credited, as are others featured in the work. I found it a fascinating piece and could have spent a lot longer poring over its details.

As a footnote, although they’re not in this show, the Government Art Collection does include cartoons, such as this one, right, by Vicky. Government art buyers: you need look no further …