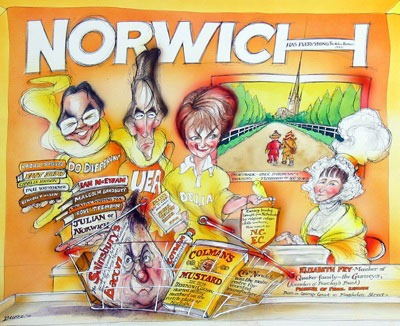 Detail from Norwich, created for Ottakar’s bookshops by Chris Burke

PCOer Chris Burke is guest speaker at the Brighton Illustrators Group meeting on 28th January. His talk takes place at the Eagle pub, 125 Gloucester Rd, at 8pm. Chris tells us what he has planned:

I’ll be taking an illustrated canter through 25 years of doodling. I’ll start by explaining why I gave up a perfectly good job as an art director in advertising. I swapped what Orwell called “rattling a stick in a bucket of swill” for the gilded life of a pencil squeezer.

I shall lightly glide over the following year which I spent in Penury (for you non-Londoners that’s between Camberwell and Streatham) then on to my Damascene journey to the West of Ireland where I came back with a pile of drawings and something verging on a style.

At this point, providing not too many people have been carried out in a narcoleptic coma I’ll recount my charmed life as a lucky bastard, how my first two jobs were for the Radio Times and Penguin books.

The second half, provided the paramedics don’t have stretchers piled in the narrow stairwell of this ancient public house at this point, will mainly be about Ottakar’s Bookshops and my part in their downfall. Cursed with more good fortune, I could draw pretty much what I wanted in the huge shop murals for each town.

I can only remember having to change three of about eighty or so pictures: Norwich, above, where someone mistook Kazuo Ishiguro for Ronnie Corbett; Slough, where I depicted Sir John Betjeman flying through the clouds with the words of his famously friendly poem extruding from his rear; and finally Weston-super-Mare, where I portayed their Baron, a lovely bloke called Jeffrey Archer. 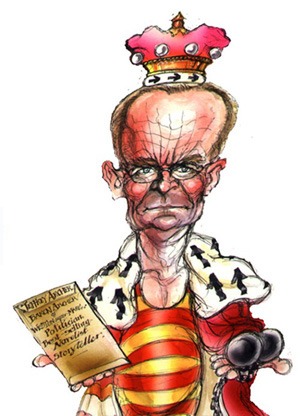 Alas those days of endless work are now gone, sic transit … talking of which, did someone call an ambulance?