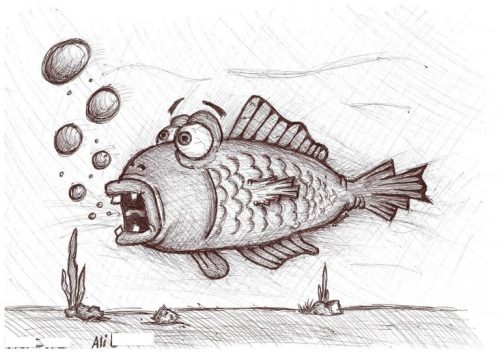 You may all have seen our press release about a month ago, identifying cartoonist Eaten Fish as the 2016 recipient of our Award for Courage and Editorial Cartooning.

The award will be given out at the final dinner of this year’s convention of the Association of American Editorial Cartoonists in Durham, North Carolina, on the evening of September 24, 2016.

We are in the last week or so before the convention. Our liaison in Australia with Eaten Fish is Janet Galbraith a poet and founding member of an organization trying to help the inmates of the infamous Manus Island refugee camp. The camp serves the refugee detention needs of the government of Australia.

While I know this is very late notice, Janet advises us that at this point a strong diplomatic and cartooning initiative coinciding with the award could make a very big difference in Eaten Fish’s immediate future.

Our diplomatic strength comes in the figure of one of our board of director members, a former US ambassador to the Netherlands, Cynthia Schneider. She and Nik Kowser met at the Australian Embassy yesterday and was introduced to some very influential people from the media and certain diplomatic circles in Australia.

They recommended using the award ceremony as a pivot point or other diplomatic and cartooning initiatives. This is a critical time for the fate of Eaten Fish, and other inmates at Manus Island, as a very large cohort of inmates have recently sent letters to a number of international protection agencies and a number of heads of state asking intervention with the illegal operations at Manus Island. It will be a poor show if these great risk takers aren’t followed quickly by the international community.

Would you please be so kind as to alert your membership that we would like cartoonists from all over the world to generate a cartoon or two that will support the freedom and basic human rights of Eaten Fish and other inmates of Manus Island.

There is plenty about him on the Internet. There are some good links as well on our website.

Please ask your cartoonists to draw as quickly as possible sending their cartoons to you for your own website and copy me at director@cartoonistsrights.org so we can work the cartoons into something public in time for the convention.

PrevPrevious1066 and all that…
NextNathan Ariss ponders the ‘filler’ – plus the happy rookie mistake!Next