Musa Kart, the world-renowned political cartoonist for Cumhuriyet newspaper, Istanbul is one of several staff pending trial for “crimes on behalf of the Fethullahist Terror Organisation and the outlawed Kurdistan Workers’ Party (PKK)”.

Accused of collusion in last summer’s attempted coup in Turkey, these journalists are just a few of the great many academics, public servants and media workers who have been fired, detained, questioned or jailed by the Erdoğan regime in recent weeks. Kart’s regular panel in the paper has been printed with a blank space since his arrest. 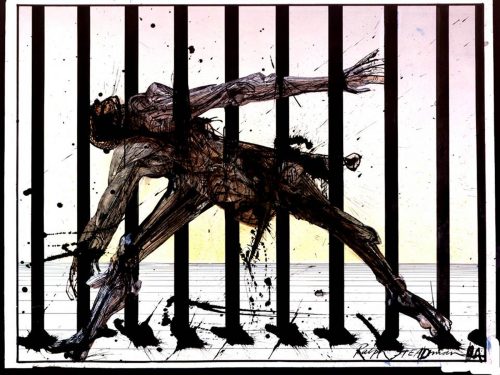 David Kaye, the UN’s special rapporteur visited Turkey in November and said: “Across the board, the Government is imposing draconian measures that limit freedom of expression […] the measures are not only drastic and disproportionate, but they lack any form of transparency.”

Today, in conjunction with Cartooning for Peace and Cartoon Movement and ahead of Human Rights Day at the end of this week, we make a statement on behalf of Musa Kart.

All three are committed to freedom of expression as a fundamental human right.

“President Erdoğan has respondent to the recent so-called coup attempt by arresting hundreds of thousands of his fellow countrymen. People from all walks of life, high ranking governmental officials, the cream of the judiciary, intellectuals of all persuasions, journalists, simple common working people and anyone else he thought had negative opinions about him have been arrested. Some witnesses have said that the entire affair made him extremely happy, as now has an excuse to get rid of all of his enemies. There still may be as many as 100,000 people imprisoned. 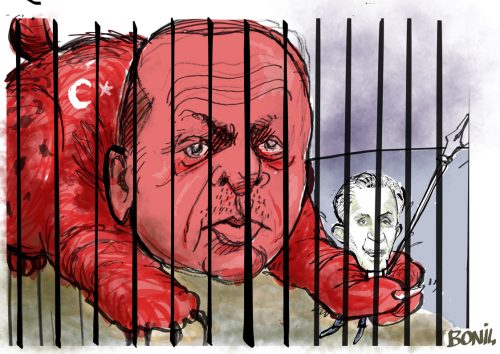 One of them is our friend and client, Musa Kart, a prominent cartoonist with the Cumhuriyet newspaper. He and a number of other staff members still languish in prison.

We point out to the President that this whole affair demonstrates to the world how utterly paranoid he is, and the degree to which his own administration has deteriorated well into the failed regime category.

Cartoonists Rights Network International calls on the President to immediately release all innocent and improperly held prisoners, particularly journalists, and specifically our client Musa Kart. We ask that he be restored to his family and all charges against him and the rest of the Cumhuriyet staff be cleared.” 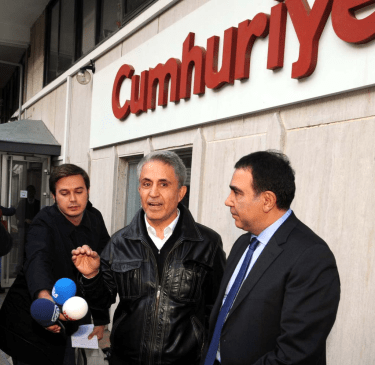 JOINT STATEMENT:
On the 31st of October the homes of a number of staff from Cumhuriyet, Turkey’s oldest national daily newspaper, were raided and under emergency powers they were detained for questioning without legal representation for five days. On the 5th of November nine individuals were formally arrested and jailed pending trial for “committing crimes on behalf of the Fethullahist Terror Organisation and the outlawed Kurdistan Workers’ Party (PKK)”.

This came amid a freezing of internet access and a wave of arrests across the country, all in an apparent effort to purge supporters of last summer’s attempted coup from Turkey’s mass media and opposition parties.

Organisations for the defence of freedom of expression and the liberty of journalists have already condemned the Cumhuriyet raid and arrests as brutal suppression of vital, critical voices in what purports to be a democratic nation.

We wish to draw special attention to Cumhuriyet cartoonist Musa Kart’s case in particular because this represents the third attempt by President Recep Erdoğan to silence him after suing for libel in 2005 and slander in 2014. On this occasion a punitive fine or jail sentence is not the worst possible outcome, as objectionable as it would be. If granted his stated ambition Erdoğan will reintroduce the death penalty specifically for those said to be involved in organising the coup. Clearly there is a real threat to Musa’s life should his trial proceed and he is found guilty of the charges given. We are witnessing an effort by the president to exact revenge on someone he has long considered an enemy.

It has been well reported that Erdoğan has taken an almost industrial approach in responding to personal offence over criticisms in the mass media. Where, we ask, is the magnanimity shown earlier this year when the many hundreds of so-called ‘insult cases’ he had instructed his government to pursue were dropped? On what basis can the drawing of satirical cartoons be considered a crime, much less an act of terrorism?

We call upon the leadership of every democratic nation to redouble their efforts in dissuading the Turkish government from its present course and demand the immediate release of our friend and colleague Musa Kart.

NB – at the time of writing Musa Kart and colleagues are in Silivri prison, Istanbul; family members have visited and say his health is good and spirit unbowed.

You can also view the statement here on the Cartoonists’ Rights Network International website.