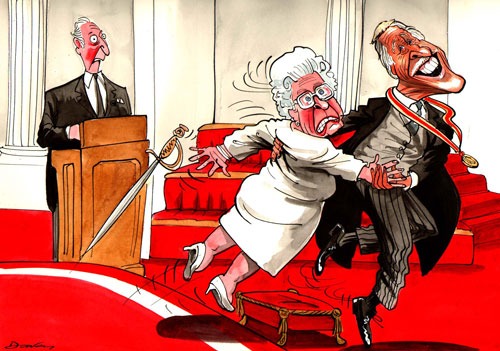 Andy Davey, the Sun cartoonist and Procartoonists.org member, tells us about his recent experience as an ambassador for British cartoons:

I was recently interviewed by Olena Gnes, a foreign news correspondent at the Ukrainian station Inter TV. She was interested in presenting a piece on the Queen’s Diamond Jubilee celebrations and was looking for an interesting hook.

Her first port of call was the Cartoon Museum in London, which had just opened its current show Her Maj, looking back at 60 years of cartoons about the Queen. The nice people there sent Olena over to me, mistakenly hoping that I could string a few aperçus together on taboos for cartoonists when depicting the Queen.

The charming Ms Gnes expected a sensible answer to the following: Do such taboos result from censorship, self-censorship or professional ethics and respect? She sought to contextualise the piece with interesting shots of finished cartoons in my rather uninteresting studio.

What could I do but accept such an invitation to make a fool of myself in front of several million people on national Ukrainian news?

In preparing a few thoughts, it struck me that her questions were interesting. There has been considerable taboo around representations of the Queen. She was never portrayed in cartoons until the 1950s and thereafter, for a decade or so, only from behind or in silhouette. It is only since the 1960s and the famous “family firm” BBC documentary of 1969 that the mystique has been lifted.

Depictions have since become less respectful – see Scarfe, Steadman, Spitting Image and Steve Bell­. But it would still, even now, be impossible to get a hurtful cartoon past the editor of any tabloid – in fact, probably more so now than ever.

I would feel pretty weird doing a hatchet job on Her Maj. It would feel like kicking my Nan. Besides, she bought one of my cartoons (HMQ, not my Nan), so she can’t be all bad [Ed’s note: it was the Bruce Forsyth cartoon above]. 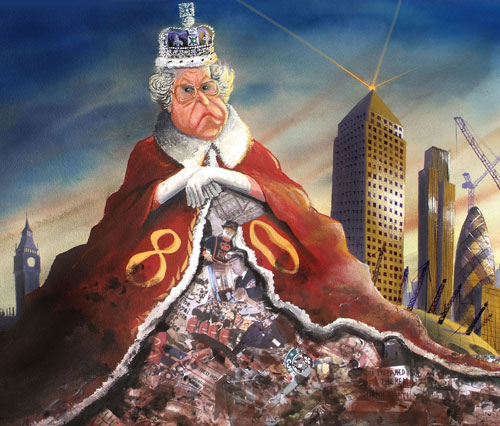 In the event, they came and filmed a cartoon on the studio wall [detail above] for which I provided a hugely complex explanation, together with a short interview.

The questioning was less demanding than expected and I ended up ranting about all things royal for a few minutes until Olena wisely instructed Ivan, her cameraman, to cut and run, obviously fearing I would send Kiev to sleep.

In this online clip from the news programme, a translator covers my voice, so I haven’t a clue what I said. I hope he made up something sensible.

Last few days: Her Maj: 60 Years of Unoffical Portraits of the Queen is at the Cartoon Museum until Sunday (April 8).