The artist as cartoonist 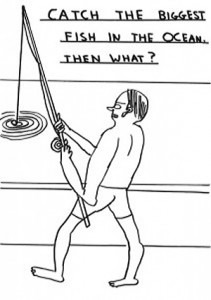 A vexed question of categorisation arises when it comes to the artist David Shrigley: Is he a cartoonist?

He and many art critics appear reluctant to use the term, but there’s no doubt that black and white line drawings, many of which are designed to provoke laughter, are what he is best known for.

And there are lots of them in this Hayward Gallery show, 117 new ones, apparently, and 42 larger painted ones. Let’s call them cartoons, for the sake of argument, and because one of them has got a desert island in it.

“The responses I would like are laughter, intrigued confusion and disquiet,” says Shrigley in the exhibition guide. That certainly sounds like the intent of a cartoonist and this stated aim is pretty much achieved here. Many of the cartoons elicited laughter and some were certainly disturbing.

Animation is also a key part of the show, most notably a very satisfying new piece called Headless Drummer, which speaks for itself. There are also lots of sculptures. These mostly retain the wonky Shrigley style and are like 3D cartoons. There’s a sculpture of a very large tea cup, with what appears to be real tea inside it. But the best joke is on the wall alongside it, on the label that tells you the materials used: Glazed ceramic, tea, milk, no sugar.

Shrigley relies a lot on incongruity, a technique well known to cartoonists i.e. putting together objects and concepts that don’t normally sit alongside each other. So we have a gravestone etched with a short shopping list – a brilliantly simple idea that reminds me of that other cartoonist-done-good, Banksy.

This is a very playful exhibition. At one point we are invited to crawl through a hole in the wall into the next room (though normal means are available for those who wish to retain their dignity). Contemporary art it may be, but you get the feeling that nobody is taking things too seriously.

Well worth a look then, and if you pay an extra £2 on top of your £8 admission you get to see the Jeremy Deller exhibition too, which is brilliant but doesn’t have cartoons in it.

David Shrigley: Brain Activity and Jeremy Deller: Joy in People are at the Hayward Gallery until May 13.

PrevPreviousThe Round-up
NextFlying to Shrewsbury 2012Next