End of an Era in Louviers

Cartoon festivals pop up here and there around the globe. Some last for decades, others flourish and die swiftly. They come in many shapes and sizes but all share a common denominator: the enthusiasm of the participants to show their art to the world and the passer-by … and to have a good time doing it.

The Louviers Cartoon Festival in Northern France was one of the best attended but, sadly, its guiding light and director, Daniel Chabouis, passed away recently.  PCO member Simon Ellinas attended several of the festivals created by its memorable organiser.

The English and the French hate each other. Official. Or so common folklore influenced by centuries of historical arguments, wars and petty grievances would have us believe. This hasn’t been my experience at all, with myriad pleasant and warmly welcomed visits to all parts of France.

The warmest welcome of all though was provided by the organiser of the Louviers Cartoon Festival, Daniel Chabouis, who contacted me in 2002 asking for a deputation of cartoonists to represent the UK at this most festive of festivals.

Daniel and his team were ultra-hospitable right from the start showing a depth of human kindness, consideration and extensive bonhomie often noticeably lacking elsewhere.

Passionate about the festival, he welcomed all forms of cartooning (see many of our past posts – Ed) and was able to persuade the local municipality to bankroll the event, along with many other local sponsors, for 12 years before it finally bit the credit-crunch dust and failed to surface in 2009. 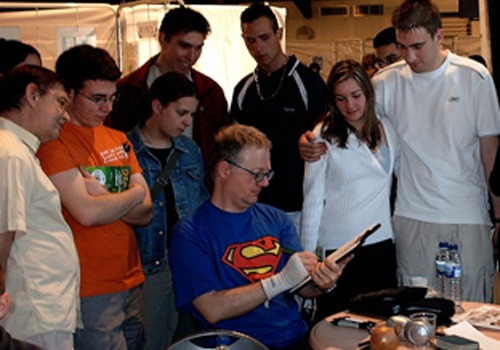 The thing he created with the Louviers Cartoon Festival which, in my opinion, is unique amongst cartoon festivals I have visited, was a real atmosphere of festival. People attended in their thousands from the surrounding cities and towns.

All the cartoonists, their exhibits and their workshops and demonstrations were under one roof. Prizes were announced over the PA throughout the event and the public were able to see the cartoonists for whom they had voted based on the cartoons they had seen. There was often a palpable and electric excitement in the air.

The Louviers Cartoon Festival was, I believe, simply an extension of the organiser’s own personality. Because Daniel Chabouis was such a wonderfully generous man with an intense joie de vivre, so the festival was always an effervescent and memorable success.

Bloghorn thanks Simon for the news, the photograph and the good memories.