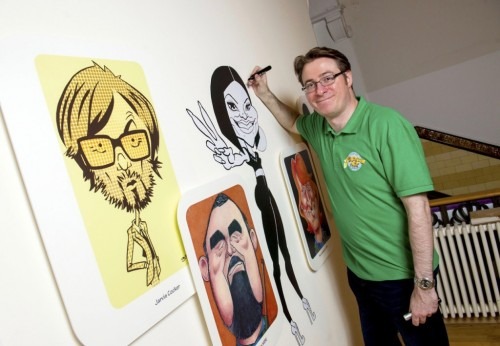 PCO member Terry Anderson with some of his superb caricatures

The Scottish Cartoon Art Studio’s collection of caricatures, Fizzers®, is a decade old this year and the subject of a retrospective show at the People’s Palace & Winter Gardens, Glasgow. Studio Co-ordinator and PCO Member Terry Anderson explains how it all came about.

After years receiving cordial invitations to attend a small group from the Studio decided to go to St.Just-le-Martel for their annual cartoon Salon in 2001. We returned in force the following year with our full team as well as the top Scottish newspaper cartoonist Steven Camley and world class comic book artist Frank Quitely. 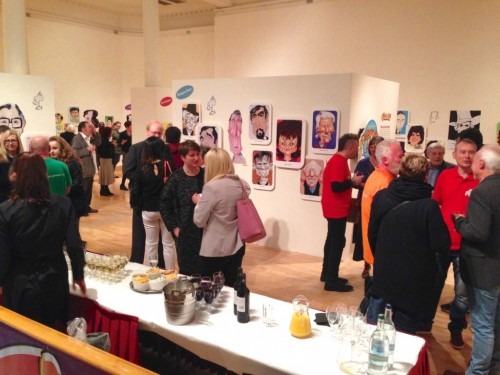 It’s safe to say that everyone’s heads were turned by the quality and diversity of work we were exposed to, in particular the caricatures by artists as different as Jean Mulatier whose coloured pencil work lends realistic lustre to flesh and hair, or Gibo, able to boil a likeness down to just a few fat pen strokes. 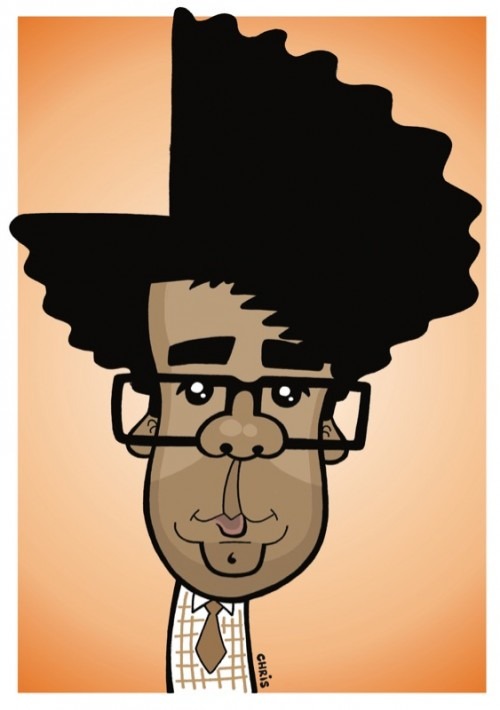 The widespread popularity of this non-editorial, apolitical mode of caricature was news to us and very exciting. Immediately we began to speculate on what we could do in the same vein. After a few false starts we started calling these caricatures “Fizzers”, a Glaswegian variation of fizzog, itself is a corruption of the French visage and so a nod to both our subject and inspiration.

Fizzers was originally conceived as a book of caricatures of notable Scots. As well as wishing to make a mark in our own backyard this was a tactical move. Practically every caricaturist under the sun has a Mr Bean or Beatles piece to show you. Few if any have tackled the cast of Still Game or local heroes such as Benny Lynch. 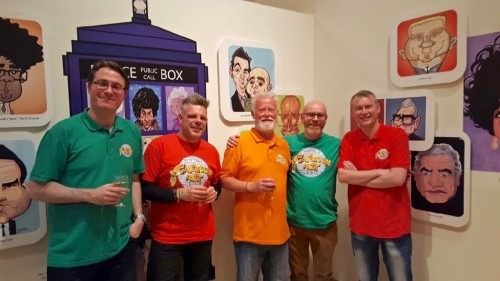 The Studio Team line up

The project became a two headed beast after being brought to the attention of the director at one of the country’s most prestigious art venues, who had publicly bemoaned a lack of work portraying contemporary faces. Hence when Fizzers debuted in 2006 it did so with both a book published by Mercat Press and an exhibition at the Scottish National Portrait Gallery, Edinburgh.

Since then further shows of various sizes have followed and the scope of Fizzers has broadened. For example my colleague Chris Sommerville has concentrated on top international footballers in recent years. When Doctor Who‘s fiftieth anniversary rolled around we took the opportunity to draw each actor who played the title role. And when David Bowie passed away a few months ago it was once of those rare instances when a single figure could present a different face to each caricaturist in our group.

So as we prepared to mount a tenth anniversary exhibition and raided our collection of well over 400 caricatures – created by Chris and myself as well as Brian Flynn, Derek Gray and Tommy Sommerville – we were able to include truly world famous personalities as well as our usual tributes to figures dear to Glasgow, appropriate since our venue is the People’s Palace, the museum of the city’s social history. 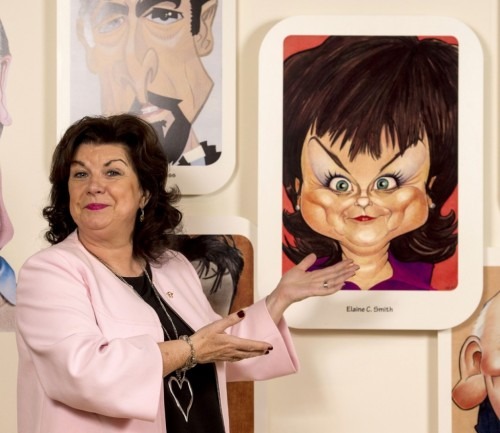 Fizzers: 10 Years of Caricature opens this weekend and will run until the end of March. It’s a major undertaking and we’re very pleased to have been paid such a compliment by the staff at the museum. Entry is free and it’s open every day except Mondays. For more details, including workshops and talks that will be occurring throughout the coming year, please visit the Scottish Cartoons website and the Glasgow Museums site.