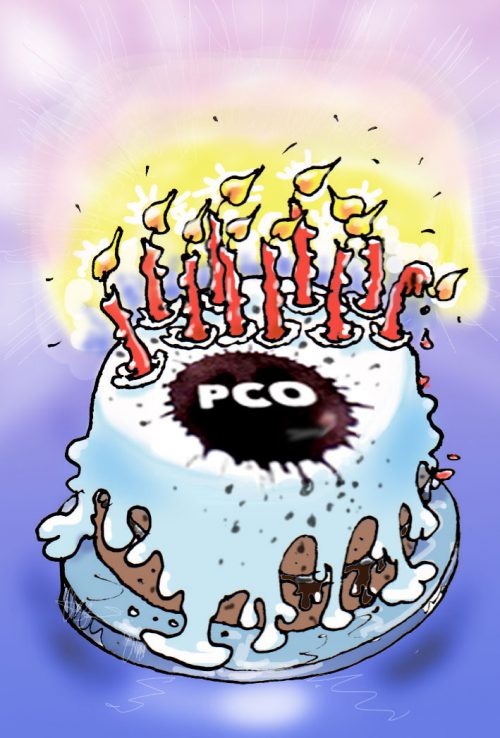 (*That’s an Isle of Wight word, ‘somewhen’, and generally means ‘mañana’ or when the plumber says he’ll be back. It’s not a nice word, but has its uses.)

At some point last autumn, or maybe the one before, the PCO passed its 10th birthday. An occasion for celebration and festivities around the globe. If these were muted, that may have been down to the fact that no one knew for sure what date that was to mark. So, even if belatedly, here’s a reminder of some of the things that have been achieved over this decade.

The PCO came of mixed parentage, love child of the  Cartoonists’ Guild (now defunct) and of the UK wing of FECO (now in separation). Thanks to huge efforts put in by founding members (all still active in the Organisation) and the tireless work of its successive Chairlegs (Andy Davey, Nathan Ariss, Bill Stott, Clive Goddard), the PCO has survived a noisy childhood and an occasionally difficult adolescence to be standing sturdy still on its own two feet.

The PCO was set up to wave the flag for professional cartooning and to help navigate the profession through the increasingly choppy waters that lay ahead. Not a lot has changed. It’s the situation we have still and know all too well today. As a previous generation would have put it, SNAFU. Even so, without paid support (except on website) and all through the voluntary efforts of active members (alongside their own business and personal interests), the PCO has managed as follows:

Festivals:
almost 20 – all credit and thanks to individual organisers, committees and a great many volunteer helpers, annual cartoon festivals have been established and continued to run in Shrewsbury and Herne Bay (carrying on the spirit of Nottingham & Ayr), all of which the PCO has been very happy to support and play a full part in (along with occasional other festivals, as at Hastings & Southport).

Exhibitions:
the regular festivals each involve exhibitions, often 3-4 (or more) together. Beyond these, PCO exhibitions on particular themes have taken place in different locations eg Henley/rowing, Finchley/cinema, Beetles/art, Westminster Library/Gagged, Charing Cross Library/Not the National Portrait Gallery… along with regular invitations to participate in shows organised by, for example, the Cartoon Museum, Euro Kartonale and St Just.

Events:
for a number of years the annual Battle of the Cartoonists run by The Big Draw was a popular event in the capital, especially when held in a prize venue like the V&A. With that no longer taking place, the PCO continues to do its bit for public outreach, with workshops, talks and caricaturing marathons made part of exhibitions and festivals.

Publications:
the PCO’s much-loved showpiece publication, Foghorn, ran to more than 50 issues over several years. With publication and distribution costs putting paid to its continuation, the PCO has had to rely in recent years on blog (1,695 posts on latest website) and Twitter (56.7k tweets) for getting its cartoon take on life out into the wider world. In 2015, in the wake of the Charlie Hebdo atrocity, the PCO worked with English Pen & Crowdshed to bring out the cartoon book Draw the Line Here.

Website:
since its inception, the PCO has relied on its website (re-vamped in 2015) for contact and communication. With more than 8k posts on 600-plus topics on its current Members’ Forum (along with access to 23,912 posts on 1,569 topics on its predecessor, the old forum), there is no shortage of information and comment to be had here on anything to do with cartooning. 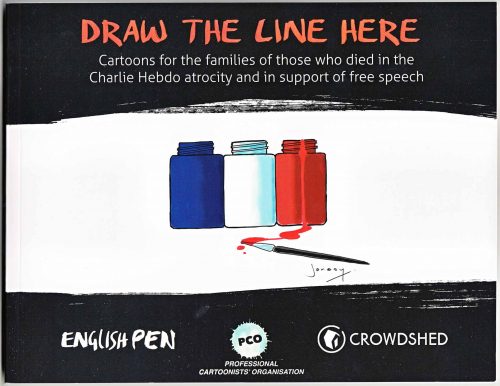 Campaigning:
repression of cartoonists, along with fellow journalists, continues around the world. The PCO has actively supported the efforts of CRNI to highlight the plight and work for the release of (and dropping of charges against) the likes of Eaten Fish on Manus Island, Musa Kart in Turkey and Zunar in Malaysia.

Closer to home, the PCO is engaged in the continual battle for space in the media for cartooning to survive and flourish. A good many letters have been posted on the subject and emails sent – along with the occasional award. 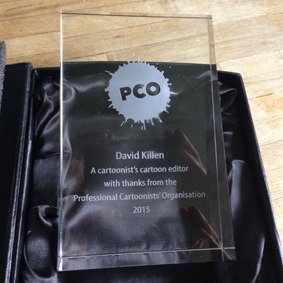 Links Abroad:
the PCO separated from FECO in 2017, but since then has still as much as (maybe more than) ever kept up active links with colleagues and associations overseas, such as France Cartoons, the Greek Cartoonists’ Association and NCS in America. Contact, collaboration and exchanges of the kind enjoyed here can only be to the benefit of the art-form. Bring them on, we say. And here’s to the next decade.

PS Please feel free, any PCO member, to put right any errors and omissions above.