Laughter rings out at Bell exhibition 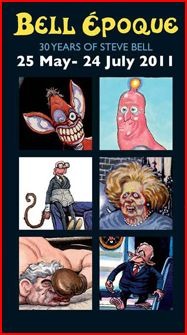 Oxygen was in short supply at the Cartoon Museum last night, such were the numbers that turned up for the opening of the latest exhibition, Bell Époque, but it didn’t stop people laughing.

It’s hardly surprising that you would hear snorts of laughter, as this is a show celebrating more than 30 years of the cartoons of Steve Bell.

The Big Man stepped up on to the seating area plinth-type thing – specially reinforced, the chairman of the Cartoon Museum, Oliver Preston, joked – to make a speech.

He graciously attributed his success to a range of cartoonists – from Ronald Searle to Leo Baxendale, Wally “Trog” Fawkes to Kipper Williams – not forgetting to mention his wife, and the ideas he gets when the couple shout angrily at the radio together, berating those political upstarts who dare to lead us. 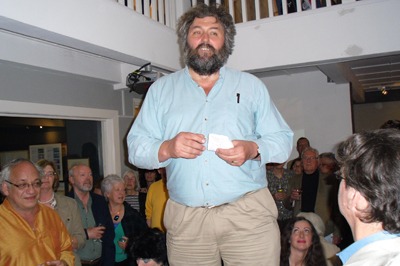 Bell is one of the leading political cartoonists of our age, but it was interesting to see through this exhibition that it took him a while to arrive at his famous depictions of leading villains such as Major and Blair. One pre-Guardian image of Thatcher, from Time Out, is almost complimentary.

Also on show are notebooks, early strips from kids’ comics, a new cartoon featuring Monsieur L’Artiste as a brothel voyeur watching Thatcher et al prostitute themselves, and a plank carved into the image of John Major. Major Plank, of course.

What else can we say about this exhibition, other than, Go see! It’s the blockbuster cartoon exhibition of the year and runs until July 24. More details at the Cartoon Museum website.

In the meantime here is an article about the show by Steve Bell, with accompanying video piece:

”You must discover the character behind the face”

Plus a Bell Époque picture gallery