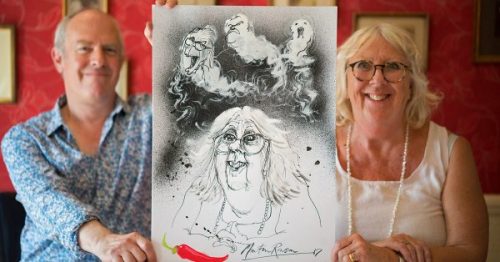 In what is described as a series of “inky interviews”, Martin draws and interviews people who have shaped his work and wider life.

“There’s almost a wilful self-delusion about the whole mutually abusive, if mutually dependent, relationship that I describe as mind over matter – the politicians pretend they don’t mind; the cartoonists pretend we matter.

One of our occupational hazards is a weird variation on Stockholm Syndrome, whereby kidnap victims fall in love with their captors. We, instead, fall in love with our victims, whom, however much we deplore them or their policies, we come to love drawing.”

Reassuringly (or not, depending on your point of view) Martin proves he’s not going totally soft on “the enemy” by concluding that what he does is “what we have instead of bloody revolutions – for a while anyway.” 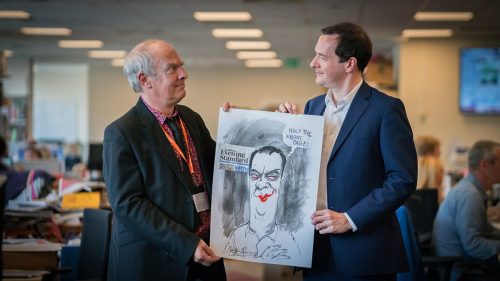 Cartoonist and politician (sorry, editor) gaze into each other’s eyes over a caricature

Martin Rowson’s series Life Drawing started on Monday and runs until Friday at 1.45pm on Radio 4 (Monday and Friday on FM only)