MY LIFE IN HIGH FINANCE (or My Love Letter to Accountants) 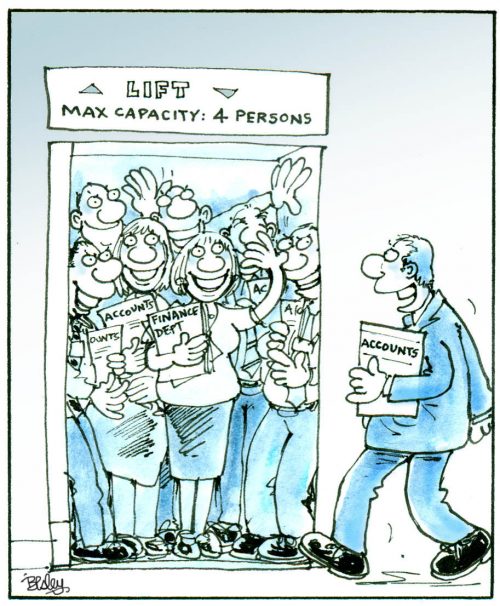 I’m ending my career much as I began it. Not getting paid.

My first regular job in cartooning was with a local newspaper and I got £5 a week. Only I didn’t. This was more than 40 years ago. I had a full-time job and this was just a sideline, so the pay was ok by me for starters.

Before I landed this slot, I had done cartoons for magazine illustration and got occasional ones into humour publications. And from these each time, back came a nice little cheque plus remittance note, with no need from me to send in an invoice. I knew nothing about invoices and the editor of my local rag, when taking me on, never touched on any such details.

Thirteen weeks passed, my cartoons appeared and no money arrived. Slowly, dimly, I thought I’d better ask why. Before I got an answer, a letter arrived to me as creditor, telling me the paper had gone bust  (the owner ended up in prison for financial misdoings). I was told to go and swear at a solicitor, all right, commissioner of oaths, to say who I was in order to have any chance (there was none) of getting what I was owed. This cost me a further £1.

Move on 44 years and I’m back in the same kind of poop. For 30 years I’ve contributed each week to another local paper on my patch. I’ve never had to send in an invoice; they see to the paperwork. Or did. Three months have passed without payment forthcoming. At the end of last year the paper got taken over by a larger concern. Jobs have gone. I’ve spent this morning in phone-calls and emails round the country chasing up my measly dues.

Earlier this year a cartoon of mine sold in a local gallery exhibition. To get my work on show required endless form-filling plus payment of £10 admin costs. By the time the gallery took 40% plus a cut for VAT, what was left was the same as the frame cost me. So, no actual earnings, but I did wait two months for my proceeds of the sale to be passed on to me. When I pursued the matter, I was told for the first time that I needed to put in an invoice (without knowing exactly how much the division of spoils should work out at). Another two weeks passed and a ratty email from me before I finally got my money back on the frame.

It’s tough being a freelance in any field, especially cartooning. It’s depressing having to spend almost as much time chasing up what one is owed as spent on the original drawing. But please don’t let me put you off. Keep at it, cartoonists. We need you more than ever.

PrevPreviousThe Cartoon Museum announces move at ’50 Glorious Shows!’ launch.
NextCould witchcraft be a winner at the World Illustration Awards 2018?Next