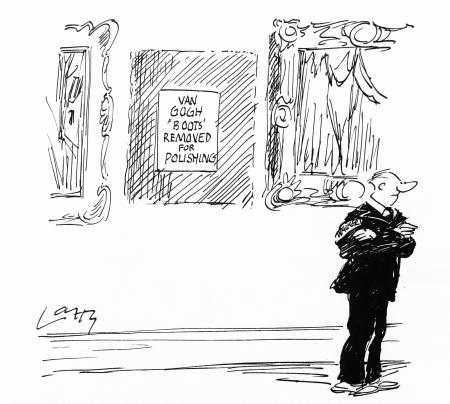 A new exhibition devoted to cartoons opens at the Chris Beetles Gallery tomorrow (April 13) and runs until May 1.

The 4th Annual Cartoon Show, at the the gallery in St James’s, London, is a selling exhibition which features more than 20 top artists from the past 100 years of cartooning, plus the following three highlights:

In Memoriam. David Levine’s Caricatures: A celebration of the work of the American caricaturist who died last December. The show features more than 40 pieces, including John Updike, Ezra Pound, and Hemingway.

Larry’s Van Gogh Collection: Cartoons about Vincent Van Gogh and his work by Terence Parkes, aka Larry, above, to coincide with the hit show currently at the Royal Academy. A group of ceramic sculptures by Larry will also be on display.

A Year with Matt: A selection of the best works by Matt Pritchett of the Daily Telegraph from the past year, as well as the latest Matt cartoons from the days leading up to and throughout the show.

Other artists on display include contemporary cartoonists such as Peter Brookes, Tony Husband, John Jensen, Ed McLachlan, Nick Newman, Martin Rowson, Mike Williams and Kipper Williams, alongside artists from the past including H.M. Bateman, Giles and Thelwell.

PrevPreviousWhat sort of cartoonist?
NextTaking a trip to Grubbe streetNext