Why do cartoonists struggle to break America?

by Nick Newman and courtesy of The Spectator.

Cartoons are like gossamer and one doesn’t dissect gossamer.’ So says Mr Elinoff, the fictional cartoon editor of the New Yorkerin an episode of Seinfeld, when trying to explain a cartoon to Elaine. Elaine isn’t satisfied. Mr Elinoff suggests the cartoon is a commentary on contemporary mores, a slice of life or even a pun. ‘You have no idea what this means do you?’ says Elaine. ‘No,’ he concedes.

The scene sums up the problem of understanding the New Yorker’s sometimes oblique sense of humour — and may come as a relief to the many British cartoonists who have tried and failed to break into the Big Apple’s literary bastion. It’s reassuring to think that even Americans as funny as Seinfeld can be baffled by New Yorkerjokes. Yet still the mystique survives, and most British cartoonists have had a stab at getting into the magazine, lured by its great cartoon history (James Thurber, Saul Steinberg, Charles Addams) and the money: it pays more than ten times as much for a cartoon than UK magazines.

Former (real) cartoon editor Bob Mankoff said in a Ted Talk: ‘The New Yorker occupies a very different space. It’s a space that is playful in its own way, and also purposeful, and in that space, the cartoons are different… New Yorker humour is self-reflective.’ Elsewhere, he recalled that when he was finally rewarded with a contract in 1980, the contract referred not to cartoons but to ‘idea drawings’, what Mankoff calls the ‘sine qua non ofNew Yorkercartoons’: a drawing that requires both cartoonist and reader to think. Indeed, there is Sam Gross cartoon of a landscape with a large sign reading ‘STOP AND THINK’ and a man saying: ‘It sort of makes you stop and think, doesn’t it?’

So New Yorker gags are more philosophical than their British counterparts. Here, virtually anything goes — sick jokes, coarse jokes, badly drawn jokes, puns. The New Yorkerhas a metropolitan disdain for crudity and eschews wordplay. We reckon that if bawdy humour and puns were good enough for Shakespeare, they’re good enough for us.

Humour is, of course, a serious business, and from the outset nobody took it more seriously than the New Yorker. Its legendary founding editor Harold Ross was obsessed with perfection and detail. Thurber recounted how Ross studied a cartoon of a Model T Ford on a dusty road and demanded ‘Better dust!’ He would also scan for hidden phallic symbols and sent a photographer to the UN building to check whether a drawing of its windows was accurate. Cartoons that fell below his standards would receive a ‘Get it out of here!’ 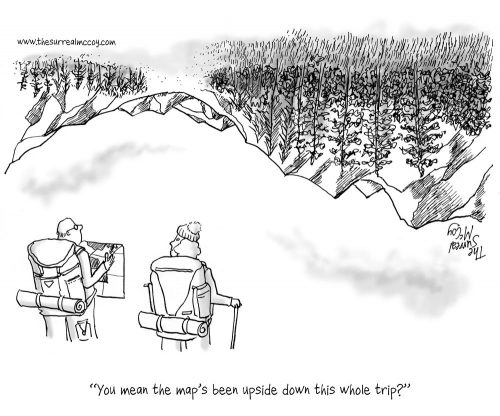 Today, aspiring New Yorker cartoonists just have to endure months of silence once their ideas are submitted. Success is greeted with a restrained ‘Okay’ from cartoon editor Emma Allen. Two British cartoonists who have enjoyed such success — following on the heels of a few UK predecessors such as Ronald Searle, H.M. Bateman, and Heath Robinson — are Will McPhail and Carol Isaacs (who draws under the pseudonym The Surreal McCoy). Both are adamant that the work they submit for the New Yorker is essentially no different from that published in British magazines.

‘My approach is more or less the same for both sides of the pond,’ says Isaacs. ‘Maybe tweaking the grammar and spelling for the Americans. I love Seinfeldand the Marx Brothers as much as I love Spike Milligan and Fawlty Towers. As they say over there, go figure.’ 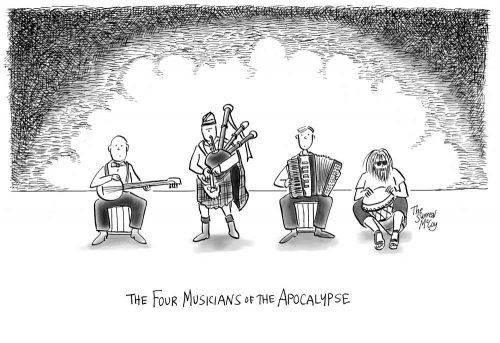 McPhail thinks the recent trend towards more absurd and bizarre cartoons in the magazine have helped his cause. ‘Those are the cartoons that genuinely make me laugh, the ones where I don’t know why it’s funny. I’ve always seen a lot of the humour in British cartoons like maths equations. They’re perfectly balanced and everything that is set up at the start of the equation works out correctly by the end. But I like cartoons where you can’t see “the strings”, if that makes sense.’

Is familiarity with New York essential to inhabiting the New Yorker mindset? Isaacs thinks not. ‘After all,’ she says, ‘there are many New Yorker cartoonists who’ve never set foot in New York. Their sense of humour is perhaps more about the absurd than anything else — and that knows no borders.’

McPhail confesses that he used to make pilgrimages to the New Yorker offices just to submit in person to Bob Mankoff. ‘I of course pretended that I just happened to be in New York at the time. So I do think there’s a certain amount of them needing to know you’re serious about it before they publish you, like “Wow, he’s come all the way here to get rejected in person!”’

Each week thousands of submissions are boiled down to some 50 acceptances. The closest I’ve come to making the grade is when I saw a cartoon identical to one I once drew for Private Eye(of a drunk ventriloquist in the gutter whose dummy is vomiting) on the cover of a book entitled The Rejection Collection: Cartoons You Never Saw, and Never Will See, in the New Yorker.