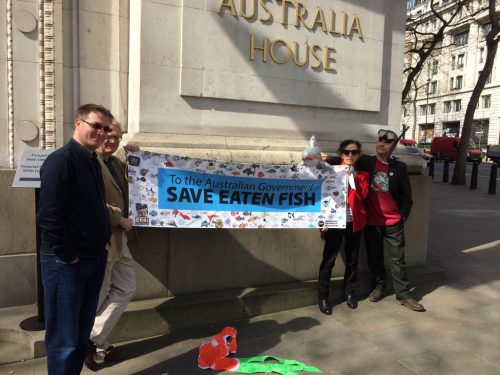 Last Thursday was the warmest day of the year which bode well for our protest outside the Australian High Commission in London. Members of the PCO and CRNI, along with some enthusiastic volunteers (one of whom was co-opted by an activist in North Carolina after noticing our #AddAFish campaign on Twitter) gathered to protest against the Australian government’s detention of refugee Iranian cartoonist Eaten Fish on Manus Island, Papua New Guinea. The threat of deportation back to Iran is growing ever more real as the Australian government are planning on closing the detention centre by the end of the year. 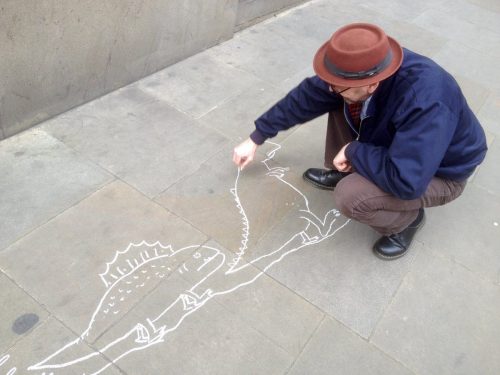 Wielding a banner with some of the fishes contributed by cartoonists from all over the world, we stood outside the passport and immigration office. We handed out flyers with information about our fellow cartoonist’s plight and a respectful request to the Australian government to give him asylum. Three of the London Klezmer Quartet kindly provided some musical accompaniment as we peacefully chalked even more fishes on the pavement. 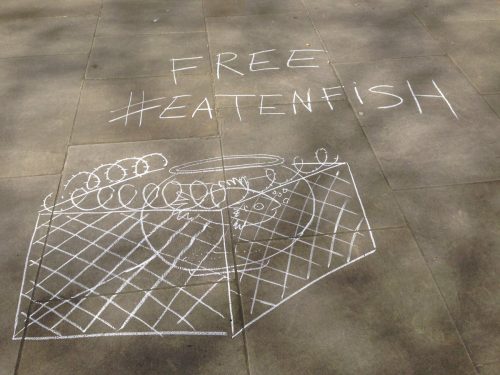 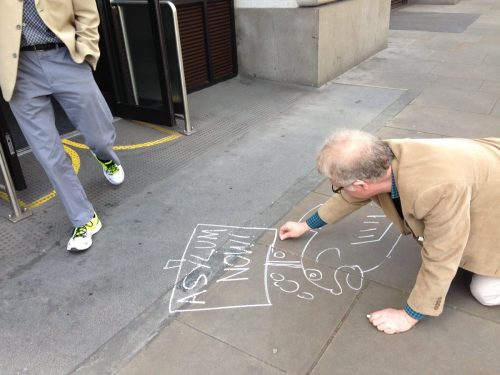 Eaten Fish himself had provided a statement for the event which read;

“My name is Eaten Fish. I am an exiled cartoonist who has been detained in detention centres run by Papua New Guinea and Australian governments on Christmas Island and an island in the Pacific Ocean called Manus since July 2013. My cartoons are my diaries. I’ve been suffering so much from different illnesses such as OCD, panic attacks, seizures, muscle spasms, depression, anxiety and self harming. I have been under too much pressure from the immigration department and also sexual assault and ongoing sexual harassment for a long time and been beaten by the PNG Royal Police. After suffering so much, to protect myself,  I’m living in an isolated compound for more than a year and do not feel safe to live in this country any more, where you get beaten if you complaint about sexual harassment. Everything about my situation has been documented. I need nothing but peace and safety. My rights have been taken away from me. I need to be in a safe place where no-one insults me because of the way I look.”

Let’s hope someone inside was listening.

Read the CRNI report on the event here and view the video extras too. 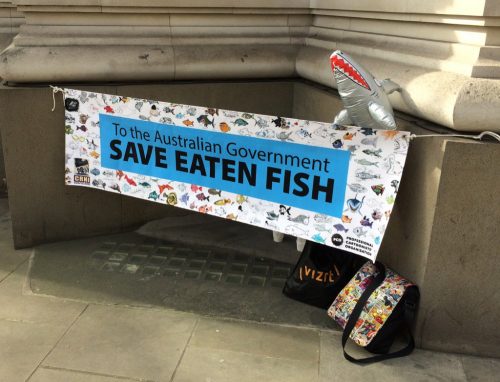