VARIOUS bigwigs at the Beeb have suggested recently that BBCs Three and Four could be axed, in a cost-cutting move. The former is fine by me – there’s only so many times you can watch Two Pints of Lager and a Packet of Crisps repeats – but on the evidence of Comics Britannia, we should get the placards out and start a “Save BBC Four” campaign right now.

The documentary was nothing groundbreaking, it was a straightforward, chronological, talking-heads history of British humour comics, but it was informative and intelligent and mercifully free of the kind of dumbed-down script and constant re-capping that afflict so many contemporary documentaries (see BBC Two’s British Film Forever series).

The first of a three-parter (the others are on boys and girls comics, and the grittier work that emerged in the 1970s and led to the graphic novel boom) it was a chronological potted history from the birth of The Dandy in 1937 to the present day. It began with a serious misstep that some commentators have already noted, the claim that “speech balloons were a key innovation” of The Dandy – in fact they’d been around for hundreds of years – but it soon redeemed itself as it took us on a nostalgic journey through the story of DC Thomson’s iconic Beano and later IPC rivals such as Whizzer and Chips. 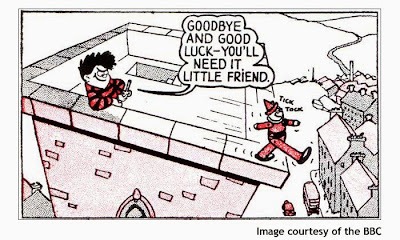 Issues that arise out of a study of comics, such as the early racism, their role in brightening up a grim postwar Britain, and the debate over whether comics are “bad” for you, were discussed intelligently by the likes of Guardian cartoonist Steve Bell, poet Michael Rosen, Aardman animator Nick Park and a whole roster of cartoonists and writers from the glory days of comics.

What was particularly satisfying, from this cartoonist’s point of view, was that the documentary, narrated by comedian Armando Iannucci, stated that its mission was to uncover the artists behind the strip and give them due recognition. And it did just that. It was a joy to hear the names of Dudley Watkins, David Law and Ken Reid mentioned on TV and particularly great to see the genius that is Leo “Bash Street Kids” Baxendale being interviewed. It was also great to see artwork presented in all its glory, so close you could see the pencil marks.

I’m looking forward very much to parts two and three, as well as to the other shows in BBC Four’s comics season (see link below for details). In the meantime, I’ve got placards to write.

Here’s a link to the Beeb’s comics Britannia site and thanks for the review Royston. Bloghorn says check out R for Robertson here

From the PCO (Professional Cartoonists’ Organisation)
PrevPreviousPCO Procartoonists – A history of comics art
NextArtist of the month: Pete DredgeNext