PCOer Bill Stott writes in response to our recent guest blogger Neil Hepburn. Matt Buck who edits Bloghorn agrees with very nearly all of it.

In cartooning, whether you use a steel nib and blackberry juice on vellum, or a wall full of Apple Macs, the main thing is to be graphically funny and have something to say. I think terms which divide, like “traditionalist” cartoonist are misleading.

I don’t like graphic humour which isn’t funny or is badly drawn or made. I know the subjectivity argument is impossible to avoid here. 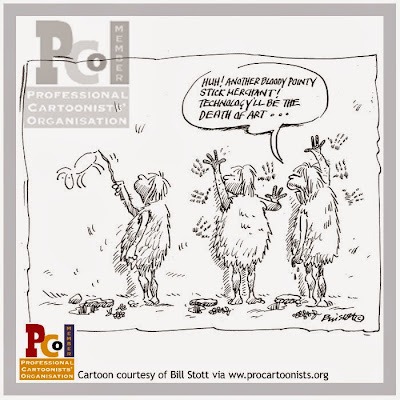 Phenomenally successful pap like Scooby Doo left me bored stiff, whilst Fat Freddy’s Cat I could die laughing at, but, this doesn’t make Scooby Doo a bad cartoon.

Take Fat Freddy’s Cat. What makes it original, and for me, very funny, is a combination of the traditional and the new. Traditional is the panel story format which Gilbert Shelton used. New is (was, really, its 1970s) the bad language. And the cat’s constant camera mugging, usually with a morsel of feline philosophy. FFC reflected the age it sprang from – US West Coast drug use, sex and rock and roll – all neatly observed by an ugly tomcat who sported a decent pair of balls.

In talking about what Neil Hepburn has written for Bloghorn, ‘I’m going to use the term “photomontage” because its traditional. Ha! Its more or less what Photoshop is anyway, and is no more or less acceptable than stuff drawn with a pen on 220gsm paper, if it is good. How the art was produced doesn’t dictate its funniness. Photographs, manipulated or not, can be very funny. “Have I Got News for You” uses stills with an inappropriate voice – over to great effect.

However – I love that word – my real argument is with the fickle media; the bandwagon leapers who are so very easily seduced by newness; by iPods which are puffed by ads recommending them if you want to record BBC news and listen to/watch it later. Come on ! Get real. Technerds like them not for what they can do, but for the mere fact that they CAN. Once, “Turbo” written on the back of a Saab meant something. Now, my vacuum cleaner’s a turbo.

Editors tend to think they discovered photomontage, because getting a PC let them. What that PC didn’t do was invest them with visual discrimination. They’ve always had eyes, and it has always been a struggle being a freelance traditional cartoonist. Then, along came Photoshop, and Hey ! Look what I can do ! Who needs Steve Bell, Martin Rowson, Dave Brown? Bill Tidy, Mike Williams, where are you?

It matters not a jot how the gag was, or is, made. What matters, economically, is who judges it in the first place. Can the editor tell a good gag from a dying wildebeeste? Is the editor so narrow that he/she sees only Photoshop? The PCO has tried to make a start by searching for a level of quality work, judged by a jury of their peers. Applicants get vetted. They are accepted on a majority vote. Photomontage has (as yet – Bloghorn) no such system. Neil Hepburn is good. He makes me laugh; take notice. Lots of other manipulators aren’t and don’t. Just like some ‘traditional’ cartoonists.

Maybe, years down the line (that’s a thing you draw with a pen), when all the traditionalists are dead and gone and heirless, editors will suddenly discover hologramtoons – eye activated – all singing, all dancing little bods in 3D – right there on the page, and Mr Hepburn will feel the same sense of ignorant waste PCO founder members felt a short while ago.

Before then though, PCO could, and in my opinion should, keep this debate going. What matters most is the quality of graphic humour, not the manner of its making.

And to move Bill’s thoughts on, there will be one further piece from Neil coming up on Bloghorn early next week.
British cartoon talent