Following on from the start of our adventures into the broadest definitions of graphic humour, Bloghorn has asked Neil Hepburn, or Beau Bo D’or, one of the best exponents of photoshop jokes in the country to write for us and very kindly, he has agreed. This is the first of a number of pieces we are going to publish here examining the crossover between drawn and mechanical imagery and how the two can combine and conflict. Over to Neil and his thoughts on what exactly it is a photomontage artist does…

I‘m both intrigued and concerned to be asked to write a few lines for the Bloghorn and give my views on image manipulation, the media and promotion – even though I was just asked to discuss image manipulation (IM).The other topics are, however, inextricably linked to IM, or, some anticipated responses to what I have to say about it, so please bear with me.

First of all, I don’t consider myself a cartoonist.

I believe this term implies all or at least the greatest part of an image is created by hand and from scratch. I obviously don’t do that. If I could turn back the clock and regain some of the skills I had when I was a kid, then I would and I would be attempting to do what you guys do, maybe with the odd photographic twist. Maybe, with a little more patience, I could get my eye back in but I see that as a remote possibility. So, I cut up and piece together, mostly, photographic imagery but sometimes include my own ‘artwork’. 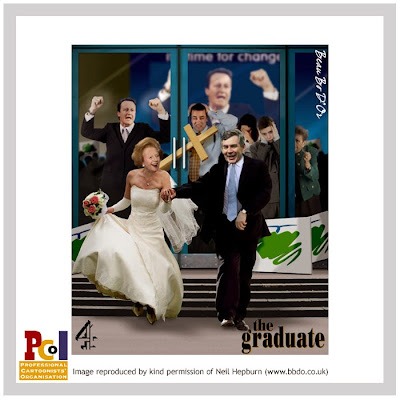 This ‘mashing up’ of existing images has its benefits but many more drawbacks. You are limited in what you can create and to get anything near to what you initially saw in your mind’s eye, you have to compromise on composition, accuracy, quality and frequently abandon any reasonable attempts at caricaturing. An audience (and some editors) may like the concept of photo-realism in a ‘cartoon’ but when you use photographic sources, your editing/manipulation must be of a sufficient standard to manage the expectation of a degree of photo-realism, which is both time-consuming and sometimes just too bloody difficult.(There are of course some IM styles, the screen/halftone tear and paste which can be quite valid which do not require skintone matching, proportion etc.)

Many may think IM is a quick process. It isn’t. Some images take a considerable amount of time and, if you do cut corners, it is painfully obvious. The sarcastic comments of ‘seamless’ can be deafening.

Talented artists do not have these constraints. You create from scratch, stretch, shrink and caricature but most of all, simplify while creating recognisable figures, scenes and faces, each of which can either be an integral part of the humour or so simple (yet so difficult to create well) that it does not distract from the humour or the message of your cartoon. Simplification is much more difficult when you work with a medium that is supposed to convey minute detail. So, what I do is compromise when I create an image like the one published here.

Bloghorn says there will be more from the talented Mr Hepburn coming up, so loosen up that creative thinking muscle.