The conductors of the country’s five main philharmonic orchestras
have issued a manifesto to the government, deploring levels of understanding and accessibility to classical music with regard to “the majority of young people” in the UK. One of many recommendations, amongst the usual cries for more and better teaching of music, is for orchestras to offer free admission for young people to certain concerts. A small group were interviewed on radio and individuals said that it had been a positive experience. AND that they’d go again. 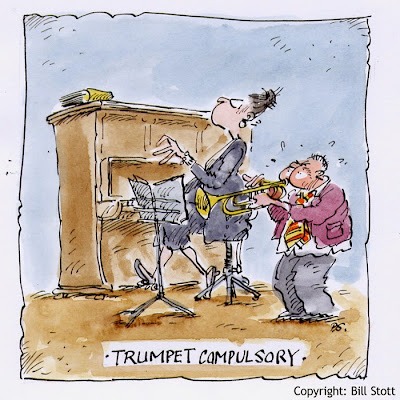 I think that one of the reasons behind the shrinking cartoon market in magazines and newspapers is the relative youth of editors. If that’s a problem now, it will be a much bigger one in ten years time when some young high flyers will have been toddlers when Punch breathed its last, and in the interim, many more mags will have dropped cartoons. Even the long and honourable tradition of political cartooning isn’t immune to the insiduous creep of young people with Photoshop palsy.

So, if the musicians can get ’em young, why can’t cartoonists?

Obviously, unlike the musicians we can’t have a group of kids peering over our shoulders while we work. Quite a few cartoonists work, with the approval of LEAs (Local Education Authorities), doing cartoon workshops in schools and colleges. But I suspect those workshops deal with the HOW of cartooning, and not the WHY. I don’t envisage a whizzbang powerpoint light show with FAQs. Work of different types available, yes, and a hardcopy handout, but mainly a Q&A session with sixth formers (or equivalent) – a discussion with a successful, freelance cartoonist (or two) who may well demonstrate their preferred techniques, but would NOT be running a how-to workshop. In my experience, schools are always on the lookout for able professionals from all sorts of jobs to come and talk about what they do. How does a joke happen? How do you say a hundred disparaging things about the American president in one picture?

Given the quality, experience, and communicative skills embodied in the PCO, the organisation might do well to take a leaf from the musicians’ book.

UPDATE:
It has been pointed out that the PCO and Foghorn the Bloghorn do have some history with music… 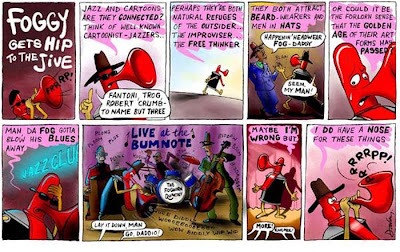 From the PCO (Professional Cartoonists’ Organisation)
PrevPreviousArtist of the month: Martin Honeysett
NextPCO Procartoonists – Advice from a professional cartoonistNext