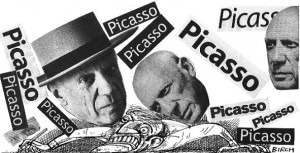 In 1881, Pablo Picasso was born in Malaga, where his father, a competent but uninspired painter, was Professor of Art. According to his mother, Pablo’s first word was “piz”, being the ending of “lapiz”, pencil. However, as “pis”, pronounced the same, means pee, I have my doubts.

In 1891, the family moved to Galicia. From those ten years, Malaga has created a thriving industry. The artist’s birthplace, a beautiful  house on the Plaza de la Merced, one of the city’s main squares, has been converted to a museum and art gallery. On the same square another building houses a good-sized gallery where  the shows all have some sort of Picassian connection.

But the main attraction is the Picasso Museum itself, housed in a magnificent Renaissance palace, and spreading outwards in a series of modern buildings that take up most of the old Jewish quarter, complete with concert hall, archives and study centre. “We bought the entire area and knocked it down,” Bernard Picasso once told me. Throughout the city centre, shops sell Picasso prints, postcards, T-shirts, you name it. Every other bar bears his name.

Above is a cartoon published a few years ago, about how it feels being an artist – or at least a British cartoonist – in Malaga.

Surprisingly for such a revered figure, Picasso still has the power to cause controversy. Last year there was a big fuss when Christine Ruiz Picasso tried to get the museum director sacked for a show of anti-fascist art, whose centrepiece was a series of etchings by Picasso himself! It made the Spanish news, and I wrote a short piece for The Independent.  It soon blew over, and the director’s still there. A storm in a teacup, like so much here.