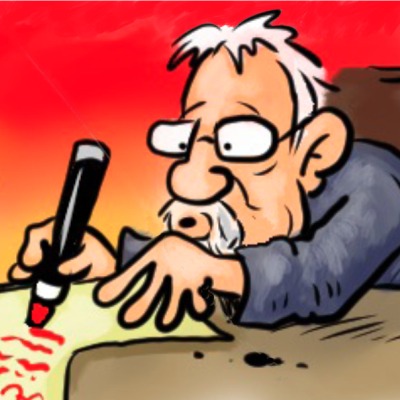 As soon as I was old enough to hold a crayon I decided I wanted to be a gag cartoonist, inspired by Roland Fiddy whose cartoons I grew up with in the otherwise earnest ‘Look & Learn’ magazine. Blessed with generous parents, I was hurriedly furnished with a copy of ‘How to be a Cartoonist’ by Walter T Foster which I studied thoroughly despite it being about 40 years out of date.

At 19 I was hired by the Newbury newspaper to produce a strip that could be about any local issue so long as it wasn’t contentious or funny then a mere thirty years later I finally sold my first cartoon to a national publication. It was Private Eye and the joke was about BSE; a nasty livestock disease but an excellent source of humour.

Since then I have had regular spots in Private Eye (Gogglebollox) the New Statesman, Zoo, Fortean Times and the Sun on Sunday. I have made appearances in most other UK publications and a few in the US (including Playboy) and drawn commissions for the BBC, OUP, Specsavers and many others.

I have also illustrated numerous cards for Paperlink, t shirt designs for Red Molotov and over 30 non-fiction titles for Scholastic.

I’m currently chair of the PCO, married and live in Oxford with my wife and an ever diminishing number of children.