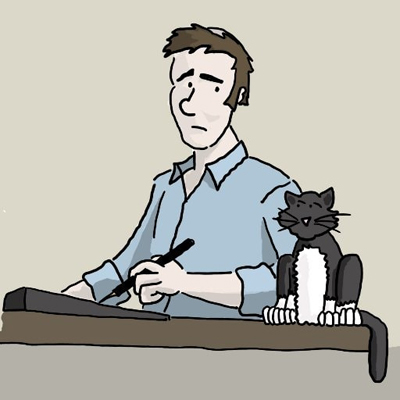 James Mellor is a freelance cartoonist based in the UK. He is a regular contributor to Private Eye Magazine and has been published in The Sunday Telegraph, The Critic Magazine and numerous other publications. He has also provided cartoon illustrations for a wide variety of books.

James specialises in cartooning for the corporate world via his business, James Mellor Creative, which has been trading since 2012. In this capacity, he has provided cartoons for newsletters, conferences, websites, blogs, pitches, and social media posts for large multinationals, individuals just starting up, and many businesses in between.

James’s cartoons have been used in charity fundraising and awareness campaigns for Amnesty International, DKMS, and Harlequins Rugby. James also received the runners-up award for Pocket Cartoon of the Year 2021 at the UK’s Political Cartoon awards.

A History graduate from the University of York, James is the author/illustrator of Drawn From History, Brexit: A Drawn-Out Process, Quarantoons and is the Honorary Historian to The Company of Entrepreneurs in the City of London.