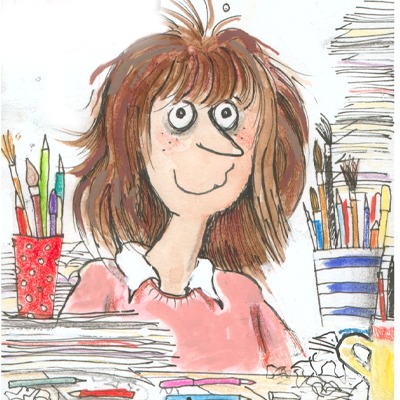 As seen in The Guardian, Times, Private Eye, Oldie, New Statesman, She, Time out, Express (but only once which might have been due to my searing critique of private healthcare, who knows?).
Illustrator/ author of about 90 books (mainly for children) and four solo cartoon collections.
I’ve been artist-in-residence for the Muir Trust and cartoonist in residence at UCLH 2016-18 Also possibly the only cartoonist ever employed by an obituary page.Or to have their cartoons dramatised on ‘Woman’s Hour’.

Painter of innumerable murals in seven countries, many houses and most recently for a children’s hospice.

Published by Random House, Bloomsbury, Harper Collins, Macmillan,Quarto and many others.

Exciting media: I recently did 17 radio interviews in one day. Never again.
Appeared in a TV panel show ‘Cartoonists versus Stately Home Owners’. I dressed up and Michael Heath said I looked like a Christmas tree. I was very, very bad.

Never miss a deadline. Quick on the draw (I wanted to steal ‘This pun for hire’)