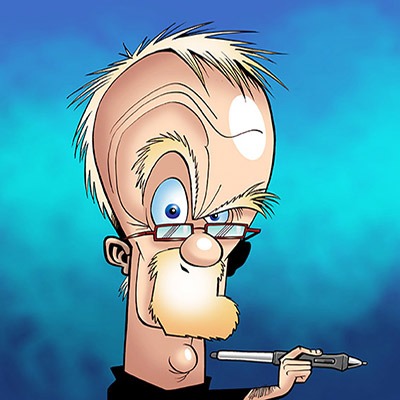 Steve ‘Brighty’ Bright has been drawing cartoons since his early school days. Back then, it earned him detention. Today, it earns him his living.

Brighty is one of the UK’s most successful, prolific and diverse cartoonists, having worked in the cartoon business full time since the day he left school as an 18-year old. Over several decades since then, he has produced artwork of the highest quality for a huge variety of publications, from The Sunday Times to The Beano, and clients from all walks of life around the globe. He can turn his skills to any area of cartoon or comic illustration, and is equally at home with modern advances that see many of his cartoon works drawn using digital technology as he is with more traditional methods.

His work has covered almost every aspect of cartooning over many years, with political/editorial cartoons and caricature being particular specialities.

Caricature has always featured prominently in Brighty’s work, and he is very highly regarded in this field, whether that be tackling detailed bespoke commissions, or working at speed, drawing the masses at live events.

Carlsberg don’t do cartoons, but if they did, they’d probably be like Brighty’s…