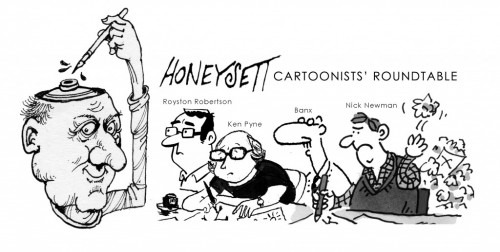 Royston Robertson writes about taking part in a tribute to the late Martin Honeysett at the Cartoon Museum in London:

Martin Honeysett is described by Bill Stott as “the cartoonists’ cartoonist” in a foreword to the excellent A Taste of Honeysett book that accompanies the current Cartoon Museum exhibition. So it was fitting that a bunch of his fellow inkslingers got together this week to pay tribute to him.

The event was organised to tie in with the last week of exhibition, a career overview of the work of Honeysett, who died very suddenly after a short illness in January 2015.

I was lucky enough to be invited to take part in the roundtable discussion along with Ken Pyne, Jeremy Banks and Nick Newman.

Charles Peattie, who draws the Telegraph strip Alex and Celeb for Private Eye, and had come as an audience member, was also persuaded to take part and share his appreciation of Honeysett. The museum was actually spoilt for choice as a sizeable number of the audience at the well-attended event were fellow scribblers, proving the truth of the cartoonists’ cartoonist tag.

For an hour we discussed the unique art of Honeysett, a genuine one-off in the world of cartooning whose work is often seen as cruel or brutal but is, we all agreed, essentially truthful. And very funny, of course.

We also shared memories of Honeysett himself. Ken Pyne told a story involving Martin, the cartoonist Michael ffolkes, and a very large cake. Ffolkes, and the cake, came off worst. Nick Newman shared a cartoon Martin drew of the three Private Eye editors at the magazine’s 50th birthday party, which can be seen here.

The floor was then opened to the audience and many favourite cartoons were discussed.

All in all, a fitting tribute to Honeysett, who is sadly missed not just for his cartoons but for his good company. The cartoonists retired to pub next door, happy in the knowledge that had Martin been there he would have been utterly embarrassed about the whole thing.

A Taste of Honeysett runs until Saturday 16 April

From the dusty PCO blog archive, here are a couple of articles written by Martin Honeysett:

Teaching cartooning in Japan
If you are Oldie enough …

PrevPreviousThere’s still time to catch cartoon exhibition ‘Humour Show at Nunnington Hall’
NextShrewsbury 2016: On the coldest of days, a cartoon festival that warmed the hearts of manyNext