Restaurant has great taste in cartoons

Andy Davey gorges on a fine selection of cartoon morsels

There is a rather nice restaurant in a picture-perfect situation, hidden inside a particularly ugly example of Sixties architectural brutalism on the banks of the river in Cambridge. It’s the on the first floor of the University Centre. 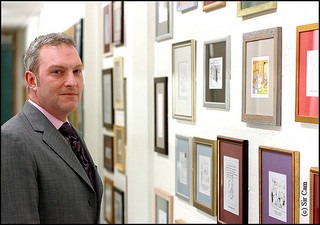 It’s called the Riverside Restaurant, but don’t tell anyone about it – it’s a local secret. It’s run by a nice chap called Tom Walston (above, photograph © Sir Cam).

We at Procartoonists.org have a particular regard for him because he rather likes cartoons. So much so that he has plastered the walls of the approach to the restaurant with gag cartoons, all on a food and drink theme. We went along to find out how this came to be.

Tom had become bored with the usual watercolours depicting rows of punts or King’s College. So after chortling at a cartoon by Gabriel Alborozo, then drawing as W. Spring, in his copy of Private Eye ten years ago, he phoned the mag to ask if he could buy the original. In those days before data protection, when real people sat at the end of phone lines, he was given the phone number of the cartoonist.

After a quick negotiation, the original cartoon was wending its way to Tom. He framed it and hung it on the wall. People commented that it would be nice to have a few more so, with a degree of patience and persistence, a rather excellent collection of cartoons by the great and the good of UK gag cartooning was built up by Tom. Employing a local framer to give the mostly monochrome cartoons more visual presence, a whole wall was covered with the gags.

Tom says he likes it because it’s different to most walls in the colleges, which are full of dark portraits of worthy Victorian beards, bursars and beadles.

Punters seem to agree – he often sees a party of diners appreciating the gags before heading in to the restaurant. He has also enjoyed buying direct from the artists concerned as it makes the transaction more interesting.