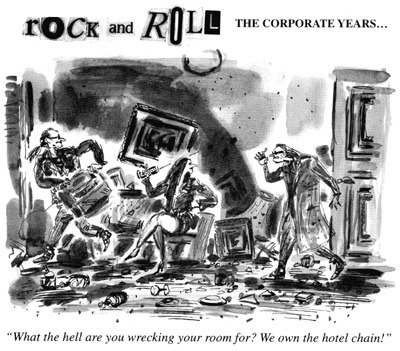 “What the hell are you wrecking your room for? We own the hotel chain”

Royston Robertson reviews the exhibition Ray Lowry – London Calling which is at the Idea Generation Gallery in East London until July 4.

This show is being promoted largely with artworks created by well-known names as a tribute to the Clash’s London Calling sleeve – a masterful piece of graphic design by Ray Lowry who was the “official war artist” for the band at the time – but it is the work of Lowry himself that is the real heart of the show. 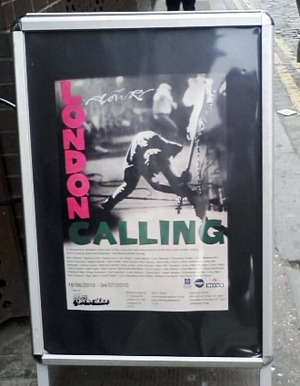 That work can be divided into several sections: his most familiar drawings – cartoons from Punch, Private Eye, NME and the like – often on music and pop culture; a collection of lesser-known artworks, including some abstracts, sketchbook drawings, and even some photography; and reportage drawings of The Clash on tour.

The cartoons are, of course, hilarious. They still work because the absurdities of the rock and roll lifestyle which Lowry pinpoints are still with us today (as indeed are the many of the rockers, though sadly Lowry himself is not). From a cartoonist’s point of view it’s amazing how small so many of them are. With those detailed, inky drawings, I assumed Ray was one of the big canvas guys.

But the standout of the show, for me, were the drawings of the Clash live. They are so coourful, spontaneous and vibrant that you can feel the excitement of the moment in them. They are full of movement, the rapidly moving sticks of drummer Topper Headon, in particular, are brilliantly rendered. 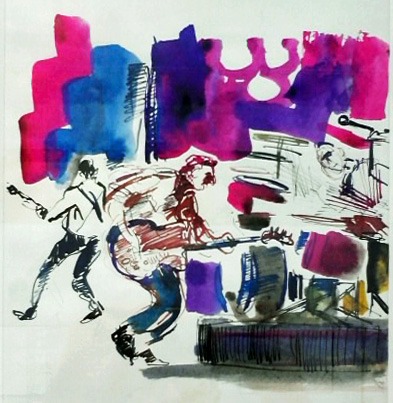 Some of the London Calling tributes are worth a look: there’s a great collage portrait of Lowry by the artist Ian Wright, and there’s a collage by Paul Simonon of The Clash which features a piece of the bass guitar which is smashed in the Pennie Smith photo on that iconic cover. The others are a mixed bag, some not so successful.

In this show Lowry is really a tribute to himself: the rock and roll cartoonist. Go and see this encore.