Royal wedding? You're having a laugh 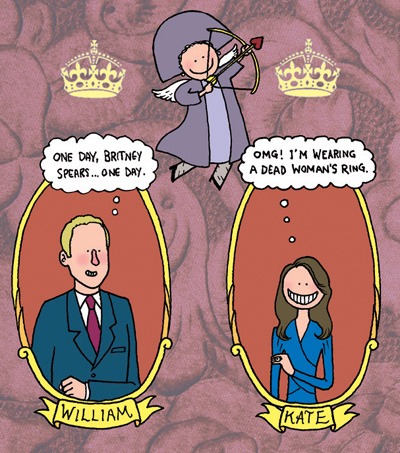 Bloghorn has noted that there is not as much overt anti- monarchist feeling in the UK as we might have expected in the run-up to the royal wedding. Instead, the attitude seems to be a particularly British one: let them get on with it but we reserve our right to take the royal pee out of the whole thing.

This “official engagement portrait”, above, by David O’Connell, is a perfect example. He has also produced a wickedly non-reverent comic called Kate Middleton: In Her Own Words, which in less-enlightened times may have seen him locked up in the Tower .

What has been particularly notable is that unlike the 1980s, when Chas and Di got hitched, people now have access to all kinds of digital media production. As a result, rather than accepting the chintzy tea towels and mugs thrown at them in the past, they are able to create their own alternative wedding merchandise and market it via the web. 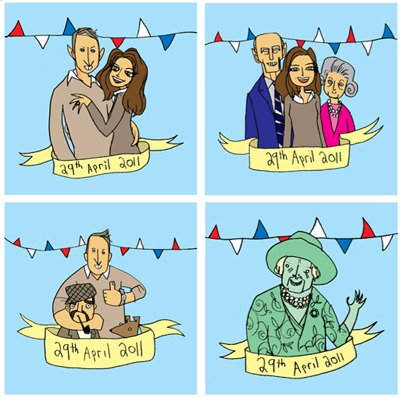 The most prominent and successful item has probably been Lydia Leith’s royal wedding sick bags, but there are many others. There’s the commemorative plate that declares “Thanks for the free day off” and describes the occasion as a “4 day bender”. Those of a sartorial bent can don a “Celebrate, peasants!” T-shirt. There are some cartoon coasters, above, available at Scary Go Round, to stick your royal wedding mug on, and for those who are, er, overcome by the whole occasion, you can buy a pack of Crown Jewels condoms.

Some bigger names have jumped on the bandwagon. Foulmouthed satirists Modern Toss have produced a commemorative mug which admits that it will probably end up “dumped in the shed filled up with old screws ‘n’ s***” . And the Guardian’s Steve Bell talks about creating his own mug in this video.

If you do make it to London to see the royal nuptials, you could pop to the South Bank where you will see Kate and Wills rendered by the graffiti artist Rich Simmons as Sid and Nancy. Respect. 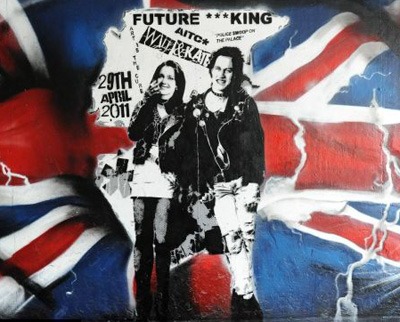 If you have seen any other amusing examples of disrespectful royal wedding tat, let us know in the comments below.