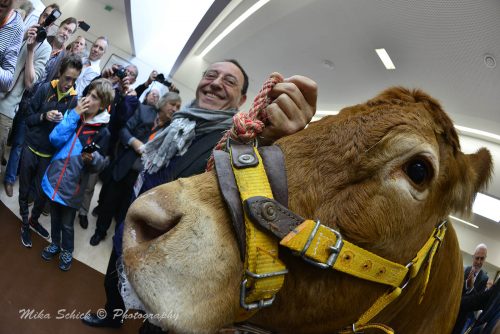 After three and a half decades the Salon can truly be considered an institution, firmly ensconced in the permanent centre for cartooning in the village of Saint-Just. Myself and other PCO members have written before about the festival’s hallmarks – a fondness for cows, the presentations of porcelain prizes, the sheer number and diversity and cartoons on display, the enthusiasm of the villagers who volunteer their services and offer hospitality to the visiting cartoonists – and all remain very much in evidence. 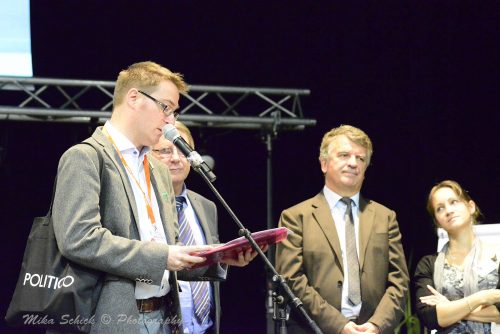 A word from our correspondent: Terry Anderson addresses the audience © Mika Schick

In a nation still reeling from terrorist atrocities, however, there are some new details. Portraits of the five cartoonists who perished in Paris on the 7th of January last year are now affixed to the exterior of the Éspace Loup (itself named for the cartoonist and dedicated supporter of the Salon who passed away in the last twelve months). Security was highly visible with gendarmes within and military personnel outside the venue. 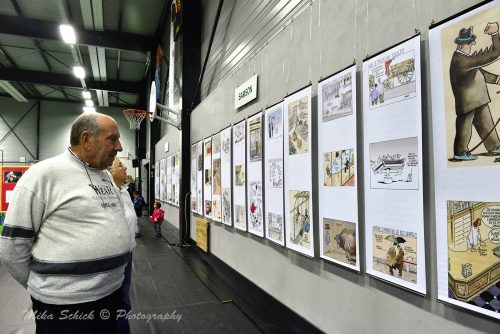 A vast array of cartoons were on display © Mika Schick 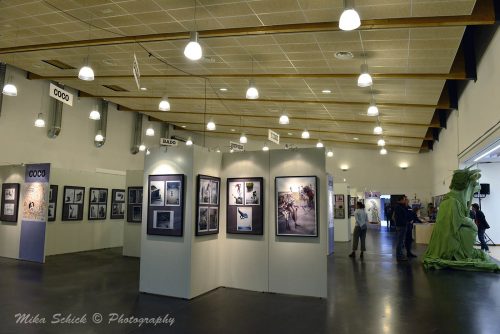 The office of the late Georges Wolinski, donated by his widow, can be found perfectly preserved at the heart of the exhibition space, right down to a half-finished cartoon on the drawing board. Alongside it this year were a selection of drawings by Jean Cabut (CABU), another murder victim, behind black drapery. Nearby a big retrospective of work by Charlie Hebdo cover artist and last year’s Prix de l’Humour Vache winner, Corinne Rey (COCO) included a poignant tribute to her absent friends. Coco herself must now travel incognito, with her participation during the opening weekend of the Salon kept out of the advance publicity. A sad sign of the times.

Other collections of note in the exhibition for 2016 included: typically sharp political cartoons by French Canadian Guy Badeaux (BADO); extraordinary geometric caricatures by Gérard Gibaux (GIBO), who claimed this year’s prize for best book; and beautiful, text-free cartoons on social issues by Cuba’s Angel Boligan. Daryl Cagle, who has organised substantial showings of American cartoonists in the last several years, returned with work by members of his cartoon syndicate themed on the Statue of Liberty’s 130th anniversary. A little British corner could be found in the international section including cartoons by myself, The Surreal McCoy, Tayo Fatunla and the ever-reliable Ross Thomson. Tayo had attended the opening weekend with the rest of us forming a post-“Brexit” missionary team for the closing days of the festival. 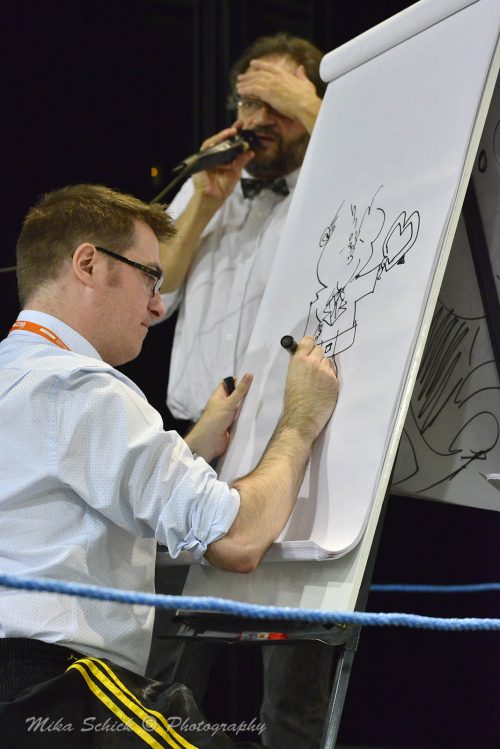 “The Ripper of Glasgow” gets to work © Mika Schick

2016 is the tenth anniversary of Cartooning For Peace, an organisation that owes much to the Salon, so it was appropriate that two of its members were made Humour Vache laureates this year – Khalid Gueddar of Morocco and Michel Kichka of Israel. Kichka is a fluent Francophone and proceeded to give a barn-storming acceptance speech full of Nous Sommes Charlie sentiment that was received with rapture by those who had assembled to see the usual visit from Justine the cow.

At such festivals all over the world there’s greater effort than ever to make the process of cartooning more of a spectacle. This year, aside from several communal murals there was an evening of improvised comedy that took cartoons as prompts instead of audience suggestions as well as “Dessring”, a quick cartoon competition styled after a boxing match. Reports of a contestant billed as “The Ripper of Glasgow” cannot be confirmed by your correspondent.

Toward the end of the festival FECO France held their annual general meeting and it’s worth noting that their long-serving president Alain Roche (NALAIR) has handed over to Pierre Ballouhey. Congratulations to both.

Thanks as always to Salon President Gérard Vandenbroucke, to Corinne Villegier & Marie-Christine Guyot who work with cartoonists all year round as well the multitude of volunteers of every age from Saint-Just-le-Martel who make this wonderful event possible every autumn. 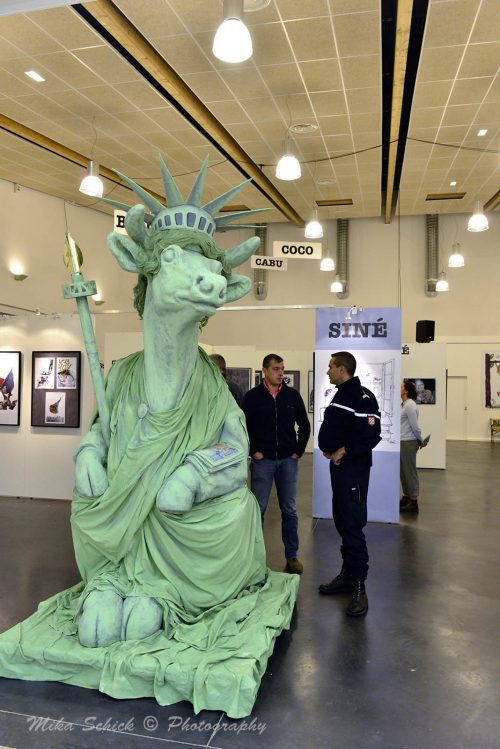