Shrewsbury 2016: On the coldest of days, a cartoon festival that warmed the hearts of many 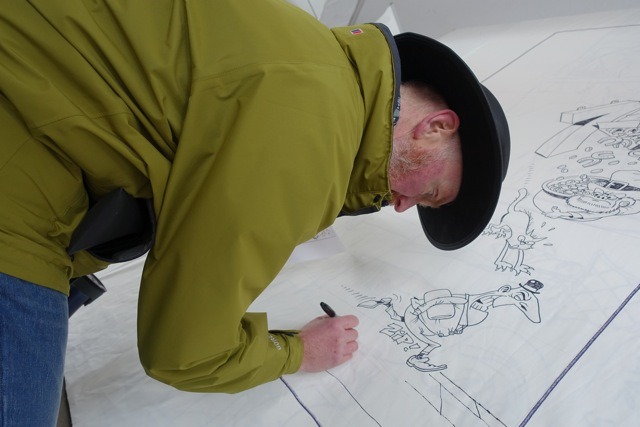 I arrived in Shrewsbury on Saturday morning with mild trepidation. It was my first Big Board duty in several years, and as a fully digital cartoonist these days, a little rusty when it comes to pen on paper, far less 8′ x 4′ canvas, slung over huge boards hinged in couples, and dotted throughout the splendour of The Square in the heart of Shrewsbury. As it turned out, rust was not the problem – an Arctic day in April put all other problems in the shade, as we all valiantly battled probably the coldest festival in its 13-year history. The digital artisans among us are well used to working in layers these days, but that doesn’t usually extend to a body-warmer, two t-shirts and a pair of long johns. It was bitter, but we all got there in the end, thanks to the sunny disposition of our hosts, helpers, and visitors in abundance, undeterred by the meagre degrees Celsius. And we were actually lucky (in keeping with the theme for this year’s event) apparently – the forecast had been snow, and indeed there were reports of some falling in the earlier hours of that morning. 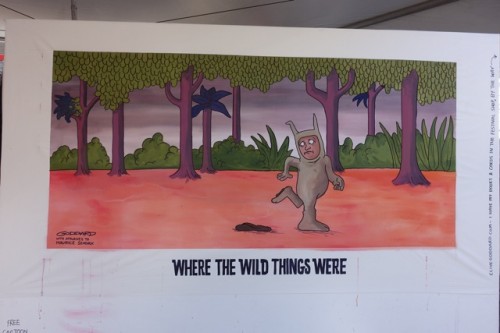 But rewind. The festival was all kicked off the night before, with a private viewing of this year’s selling exhibition at the Bear Steps gallery, which incorporated the official opening speeches from the Deputy Mayor, followed by retiring (though not in a shy way) festival Chairman, Rich Skipworth, who managed to convey a mixture of caution about the festival’s future as public funding diminishes, with real optimism that it may yet flourish beyond all previous incarnations, through grants and private initiatives. Fingers crossed!

This was followed by a real treat for all who made the short walk down to The Lion Hotel to enjoy Shrewsbury débutante Tony Husband’s deeply poignant illustrated talk, guiding us through his highly-acclaimed book, ‘Take Care, Son’, chronicling his father’s dementia with great warmth, wit, and obvious love.

From there, a splendid late evening gathering at the Shiraz, for those who had managed to stave off their hunger until darkness, followed no doubt by the odd nightcap or two back at the hotel before bedtime (or in my case, a quick drive home for a couple of hours’ kip before heading back in the following morning). 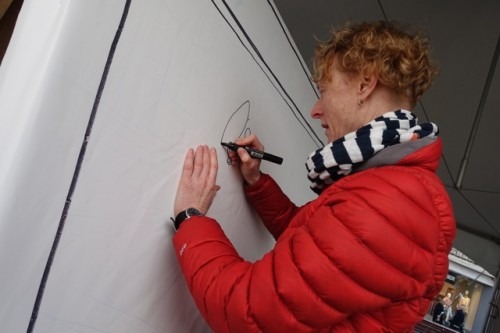 The Saturday 9a.m. briefing was the traditional signal for the ‘serious’ work to begin. Friends old and new assembled to brace ourselves for the cold and the rigours of our allotted tasks, before dispersing around the town to dispense our customary assorted forms of cartoon magic upon the hordes. It all went typically splendidly from there, by all accounts. Caricatures were drawn in abundance, the snow-blinding whiteness of the Big Boards gradually metamorphosed into wonderful expanses of colour and wit. Talks were delivered and workshops eagerly attended by young aspiring cartoonists being helped and encouraged onto the first rungs of the ladder leading to (hopefully) future official festival invitations. There was cartoon ‘busking’, cartoon exhibitions, digital and traditional opportunities for the general public to try their own hands at cartooning, and of course, it was all weaved together by the S-mile trail wending its way through the picturesque Shrewsbury streets, with cartoon treats at every turn. As always, the hard-working organisers and their team of helpers had laid on a veritable cornucopia of cartooning for all, to enjoy, and we were rewarded with the wide smiles and laughter of the visiting public in return. Our thanks, as always, go to those unsung heroes who made it all possible whilst we got most of the plaudits. And the musicians – mustn’t forget them. The temperature in The Square appeared to rise a couple of degrees as soon as they struck up the first of many songs that kept us going throughout the day. 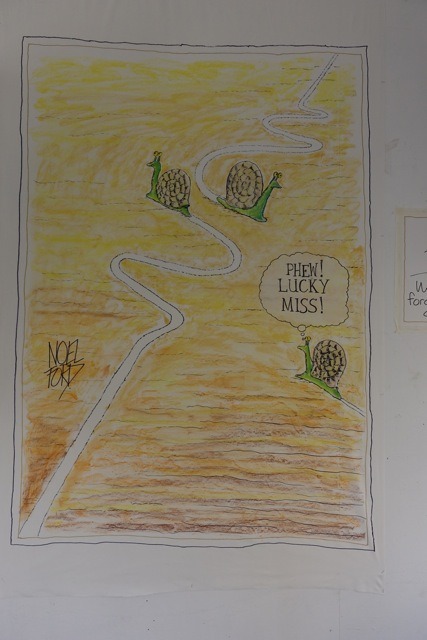 The evening meal at The Peach Tree had us donning our glad rags (in my own case, getting my kilt out of its mothballs), and relaxing with friends, old and new. Internationally, Hillary Price made her début from the USA, whilst Dean Alston once again swam all the way from Perth, Australia as he has done for most of the 13 festivals so far. And then there was Terry Anderson, all the way from Paisley…

Many old friends and colleagues were missed, toasted, and talked about, and will hopefully return to future festivals. The intention is that if all goes well with future funding, the festival can be restored to a full two-day event, and the number of invited participating cartoonists can once again be increased. Again, fingers crossed! 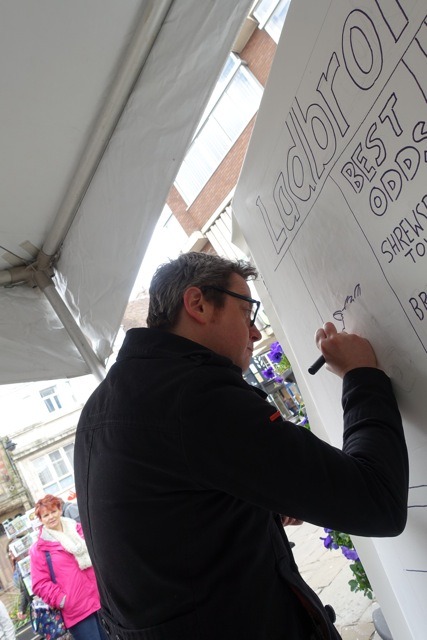 And perhaps the signs are good, if you believe in omens; our traditional ukulele-led sing song at The Lion, that melodiously took us from Saturday night into the wee small hours of Sunday morning, ended with those of us who went the distance being treated to the most lovely surprise from a group of around 30 young people, still up and enjoying the Lion’s hospitality in the adjoining lounge area. Having heard us through the adjoining doors, they asked us to play them a couple of Beatles numbers before we called it a night. It turned out they were the European Union Chamber Orchestra, unwinding from a concert in Shrewsbury that day before heading for Llandudno in the morning for their next gig. They made their appreciation known for our musical efforts, before enriching the very air around us with their truly magnificent harmonies, as our jaws hit the floor. A wonderfully surreal ending to another cracking festival, from voices like Angels…

PrevPreviousRemembering the cartoonists’ cartoonist
NextDr. Who materialises at The Cartoon MuseumNext