I was lucky enough to be able to visit the Salon International Du Dessins de Presse et d’Humor at St Just-le-Martel in France. Impressively installed in a brand new building on the outskirts of this small satellite of the city of Limoges, this cartoon festival has been running for 33 years.

The permanent display of cartoons and caricatures from around the world makes this the largest public museum of cartoon art in Europe. The last time I was there, five years ago, the events took place inside a series of marquees, while the first bricks for the centre were being laid.

My cartoonist friend John Landers and I travelled by Eurostar to Paris where we met other cartoonists. The travel is laid on by the festival organisers and local residents put visitors up in their own homes. I was delighted to find that we had been handed over to my previous hosts, who live in a very spacious and comfortable house 12km away in Boisseuils.

The whole weekend is taken up with a huge exhibition of cartoons and caricatures from around the world and a grand hall full of cartoonists drawing for the public. And the public really do appreciate this event, arriving in many hundreds on both days. The festival is actually spread out over ten or so days, with the first and second weekends being peaks of activity.

Various awards are handed out by the charismatic mayor and chief initiator of the whole thing, Gerard Vandenbroucke, the main award of the festival going to the Venezuelan cartoonist Rayma Suprani. 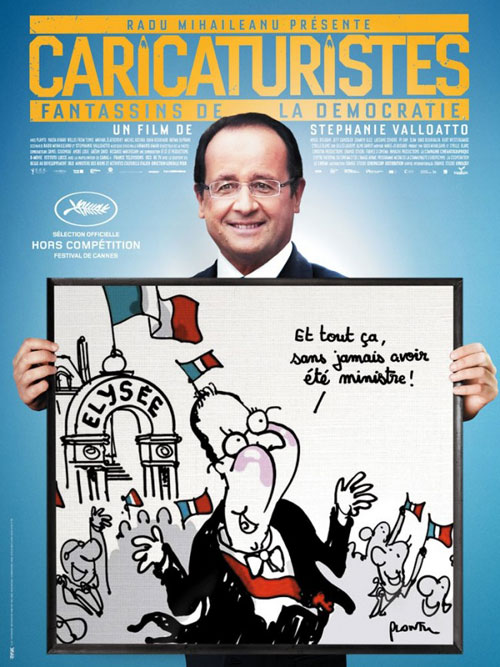 We were treated to a French cabaret evening on the Friday and a superb visit to an old cinema in nearby St Leonard. This was to see the Cartooning for Peace documentary Caricaturistes: Fantassins de la Democratie (poster above). This featured 12 cartoonists from around the world who have been working, many under great restrictions from their governments, to uphold their rights to democracy and to free speech.

Featuring Suprana as well as the Cartooning for Peace organiser Jean Plantu, the film also revealed the difficulties faced by cartoonists as far afield as China, Palestine and Israel. A very moving film which I would urge you to see.

There was a contingent of political cartoonists from America, led by Daryl Cagle and including Monte Wolverton, Rick McKee, Steve Sack, Nate Beeler and Adam Zygler. The differences between US and UK political cartooning are interesting to compare. My impression is that the UK style is more predominantly “painterly” while the US cartoons are heavily populated with a very cartoony comic-strip style.

Of course, part of the celebration and festivity are the meals with fellow cartoonists and friends. These take place at long tables in a huge marquee with the paper tablecloths becoming the centre of attention for all the artists and their arsenals of pens and markers.

All in all, a very inspiring if ultimately exhausting experience. I’ll be back.