Clips from the animated show. Warning: contains rude stuff The Ricky Gervais Show, in which the comedian’s popular podcasts are brought to visual life with animation, comes to British TV next month. The HBO show, which features Stephen Merchant, co-creator of The Office, and Karl Pilkington, their friend and former producer from the duo’s days […]

Artist Beryl Cook, a painter with a cartoonists’ sensibility for accurate observation from life, has died. The The BBC has a slideshow of her images here which are from a gallery exhibition for her 80th birthday made in 2006. There are also formal obituaries from the Telegraph and the Guardian as well as a short […]

Well, it didn’t win the prize for best animated feature at the Oscars, but perhaps it should have. If you haven’t already taken a look at Marjane Satrapi’s film, Persepolis which is about growing up Iran during the 1980s, here is another short chance to explore. It is due to open in some British cinemas […]

Something a bit different is competing alongside the usual anthropomorphic antics in the Best Animated Film category at this year’s Oscars. Persepolis, a black and white adaptation of two graphic novels by Marjane Satrapi, will be competing alongside the CGI-animated blockbusters Ratatouille and Surf’s Up, it was announced yesterday. Which means that a French film […] 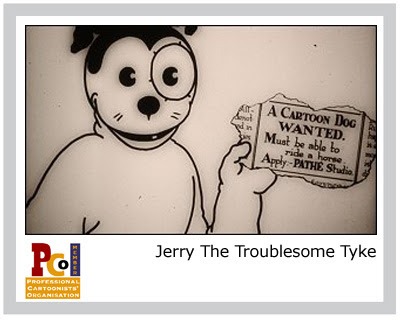