Bloghorn at the Shrewsbury Cartoon Festival 2011

Following our earlier post, here is more evidence that new technology can help turn a tactile skill into a digital work of art.

You can watch BBC Four’s take on the theme of Rude Britannia, which ties in with the exhibition of the same name at Tate Britain, just click the picture. The documentary is one hour long. Parts two and three can be seen tonight and tomorrow night on BBC Four or on the iPlayer.

In praise of cartoonists

Bloghorn thanks the editorial writers of The Guardian for spotting what our members and many others do in working for the media, companies and individuals. Modesty prevents us from quoting the nice things said about the Professional Cartoonists’ Organisation (but do go and read them)! The organisers of the Shrewsbury International Cartoon Festival would like us […]

The ghost editor and the cartoonists

Bill Stott is a cartoonist. A rather good one, actually. Even the great Alan Coren thought so. But then he loved cartoonists generally. Like many cartoonists, Bill doesn’t change his trousers with unseemly regularity. It’s a working-at-home thing. Why bother when the ones you’re wearing have a perfectly serviceable extra few weeks in them … […]

The Cartoon Art Trust, the registered charity [pdf] behind the UK national Cartoon Museum, receives no state or public funding. This means that every year the trustees have to raise £150,000 to run it. For the first time in several years, the museum have managed to get a funds-runner a place in the London Marathon. Step forward one […]

Thanks to Dave Gibbons who alerted us to this video produced by Pixel TV of a speed painting session from the angouleme comic art event. 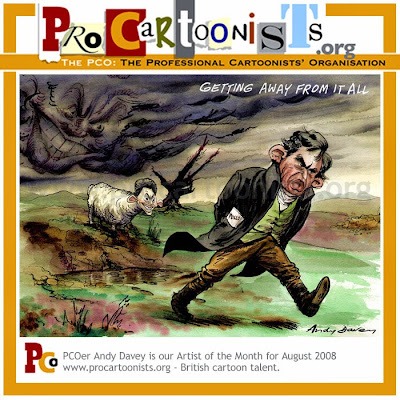 Andy Davey is the PCO Artist of the Month for August 2008. Bloghorn asked him how he makes his cartoons. I draw with small pieces of broken china, dug up from the garden, while listening to Bach fugues on the wireless. Well, that’s not strictly true. I use pen and ink too … in fact, […]

The curve of a cartoonist-part one 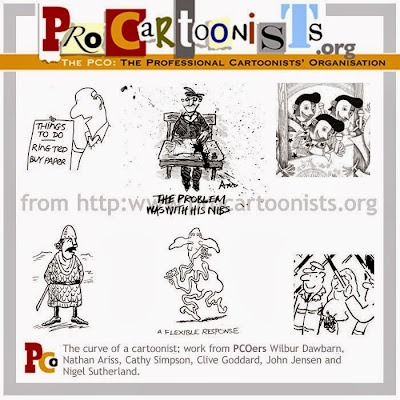 To many people, one drawing can look much like another, but to a professional practitioner of the art, little could be further from the truth. The simple dictionary definition of drawing* is the art of representing by line, but behind this statement the variety can seem infinite. Expression and communication in drawn line and the […]