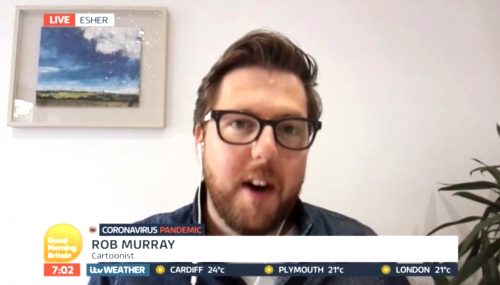 Rob Murray writes: Six weeks ago, in the midst of the Covid-19 pandemic and with the country on lockdown, I joined forces with psychologist and author Dr Kevin Dutton to launch Bottle Moments: a project using personalised cartoons to bring some much-needed joy — and to say ‘thank you’ — to frontline key workers. Kev is […]

Noel with daughter Sara at Nottingham’s Big Grin Cartoon Festival 2003. Photo © Pete Dredge Pete Dredge writes: It’s a cruel irony that it is only when someone passes  that the outpourings of love, praise and acknowledgement spill out from friends, colleagues and acquaintances. Such has been the response to the sudden and unexpected death […]

Laughter as a Political Tool

The excellent and courageous Malaysian cartoonist Zunar (Zulkiflee Ulhaque) recently gave a talk entitled ‘Laughter as a Political Tool’ at the Institute of Advanced Studies, University College London. There was also an accompanying exhibition of his campaigning cartoon work. Zunar speaking at the event (pictures of him in handcuffs featured heavily as he’s frequently been arrested) […]