The prolific cartoonist David Langdon, whose long career included work for The New Yorker, Punch and The Spectator,  has died at the age of 97. Among his achievements, Langdon claimed to have originated the ‘open mouth’ expression now used by almost every gag cartoonist to clarify who is speaking in their compositions. See The Guardian […]

Cartoons and illustrations by some of the biggest names in the business are due to go under the hammer next month in support of the House of Illustration. The Sotheby’s auction, to be held on the 16th December, will feature work by Peter Brookes, Gerald Scarfe, Eric Carle (from children’s classic The Very Hungry Caterpiller), Beryl […]

The advent of statistics recording visits to web sites has allowed web publishers to see exactly which pages readers head for. Unsurprisingly, many have embraced this technology to show you – the reader – which pages are most popular. So, I ask you to go to The Times website. Scroll down. No, you don’t have to […]

Cartoonists on the BBC's One Show

The segment starts at 8 minutes into the iplayer show.

Bloghorn spotted this great work this week… One: Stephen Hutchinson (aka Bernie) in Private Eye on child protection officers Two: Gerald Scarfe in the Sunday Times on India Three: A spot of blowing our own Foghorn … Noel Ford on the cover of the new Christmas issue of the PCO’s cartoon magazine. (Below – click […] 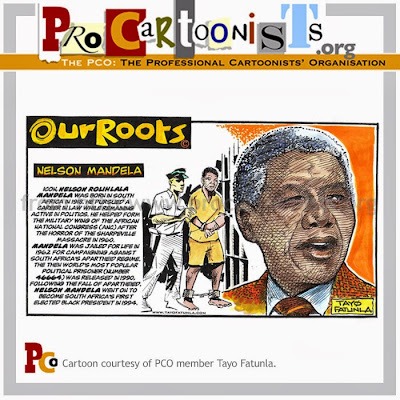 PCOer Tayo Fatunla reports on his participation in Black History month at the Damilola Taylor Centre in Southwark, London. More details are here. The BBC has a short video of Gerald Scarfe opening an exhibition of his political drawings at the Houses of Parliament. The PCO: Great British cartoon talent From the PCO (Professional Cartoonists’ […]

An evening with cartoonist Gerald Scarfe

PCOers John Roberts and Steve Bright attended a recent illustrated talk given by the caricaturist at Shrewsbury. John reports for Bloghorn: What struck me almost immediately about him is how charming and mild mannered this notoriously vicious caricaturist is . He admitted during his talk that he uses drawing as a therapy. He says he […] 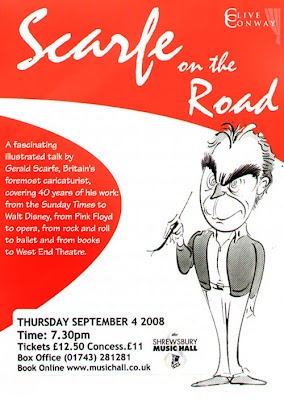 The cartoonist Gerald Scarfe is touring the UK with his show Scarfe On The Road. It comes to the Shrewsbury Music Hall on the 4th of September Scarfe is one of Britain’s most popular caricaturists and is political cartoonist for the Sunday Times. For more details on this illustrated talk, which spans his 40-year career, […]